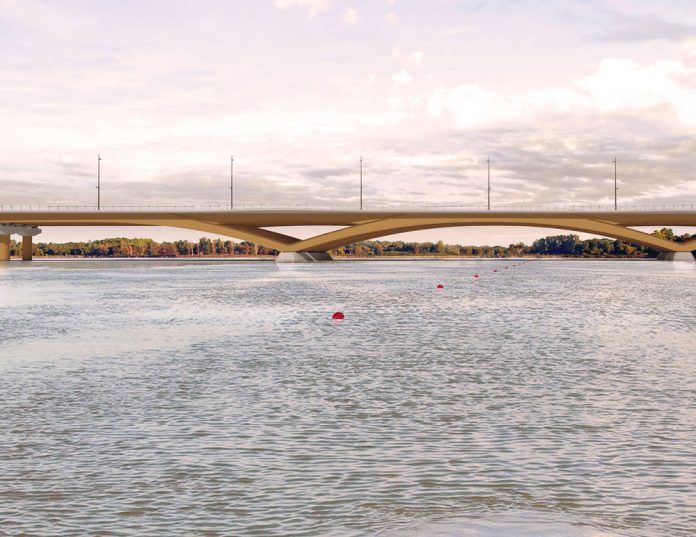 The City of Kingston says bridge construction will be completed as expected by 2023, but work on the city’s $180 million ‘Third Crossing’ scheduled to begin last summer has not yet begun.

Currently, the project is undergoing a 30-day public consultation period that opened mid-September, on the detailed impact assessment for the bridge. While the assessment process takes place, in-water work has begun in the Cataraqui River where the bridge will be built.

Kingston is building a Third Crossing bridge across the Cataraqui River from the foot of Gore Road in the city’s east-end to the foot of John Counter Boulevard in its north end. The bridge is the largest infrastructure project the city has ever undertaken and is being funded by all three levels of government – each contributing $60 million.

The new 1.2-kilometre, two-lane bridge will access for emergency services, increase active transportation through a multi-use pedestrian and bike pathway, create greater business connectivity and enhance the quality of life for the residents and visitors of Kingston.

An environmental assessment found benefits of a bridge would be:

There are four phases of the city’s Action Plan for the project:

When completed, the bridge will provide:

“It’s really the installation of the turbidity curtains and the turtle exclusion fencing, that’s going to go around the perimeter of the site” Van Buren recently told Global News.

When bridge construction takes place, 80,000 cu. m.  of stone will be dumped into the Cataraqui River, to create a temporary bridge for construction equipment.

The public consultation process currently underway is meant to allow residents to go over plans and comment before the city seeks final approval from federal government agencies like Parks Canada.

An addendum report will summarize input from the public and will be reviewed by the city and federal agencies.,” Van Buren said.

Once the public consultation period is closed, the city expects to hear from Parks Canada within four to six weeks about approval.

Residents fighting the bridge’s potential environmental impacts, say the river is apart of the Rideau Canal waterway, which is designated as a UNESCO World Heritage site.

Canada has 17 sites on the UNESCO World Heritage List, a list that recognizes places of historical and cultural value. Rideau Canal in Ontario is one of those sites.

It is primarily used for pleasure boating and is operated by Parks Canada. The canal system uses sections of two rivers, the Rideau and the Cataraqui River, as well as several lakes. It is the oldest continuously operated canal system in North America, and in 2007 it was added to the UNESCO World Heritage List.