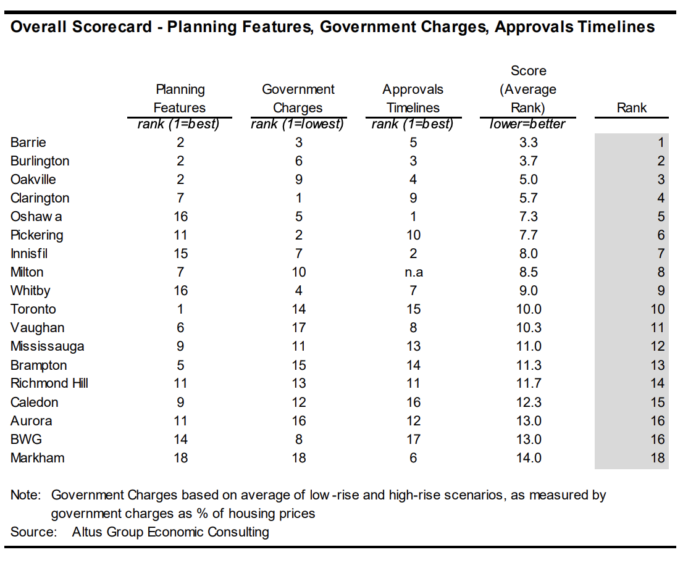 The study showed that Barrie had the best overall scorecard rank, considering planning features, government charges and approval timelines. Markham ranked lowest on the scale at 18.  In terms of individual elements,Toronto ranked best on “planning features”, Clarington had the lowest government charges, and Oshawa had the fastest approval timelines, according to the scorecard.

“There is a tremendous opportunity for municipalities to help with housing affordability by looking at the efficiencies of their processes and approval times,” BILD president and CEO Dave Wilkes said in a statement. “Added indirect costs because of long approval times can add between $58,000 and $87,000 to a typical 2,000 square foot single-family home in the GTA. For high-rise apartments, the added cost can be between $44,000 and $66,000.”

The study found that average municipal approval times for single applications across the GTA stretched well in excess of the maximum allowable times under provincial legislation. In the case of one municipality the approval time for an application stretched 29 months longer than maximum legislated approval timeframe.

The analysis of approval timelines only considers projects approved by the municipality and the averages presented therefore do not consider the substantial additional time required to participate in an application appealed to the LPAT.

On top of delay costs, the report also examined added municipal costs to new housing and discovered that on average, across the GTA, costs such as development charges and planning fees added $93,700 to a typical low-rise home and $57,800 to a typical high-rise apartment. When combined with taxes from other levels of government, including HST and LTT, the combined burden of government fees, taxes and charges accounts for almost 25 per cent of the cost of a new home in the region.

Lastly, the report examined planning features such as guidance and policy documentation, number of planning staff per 1,000 housing starts, and transparency of application status, and then combined all aspects to provide an overall ranking of municipal performance, while also identifying transferable best practices.

“The bottom line is that costs due to approval delays and added government fees, taxes and charges add almost one third to the cost of a new home in the region, and slow approvals obviously slow down the pace at which new supply can be added,” Wilkes said. “With some of the largest cities in the region performing less well than smaller towns and cities, the industry is keen to partner with municipalities to accelerate approvals and implement the best practices identified within the study.” 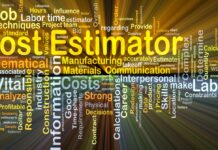