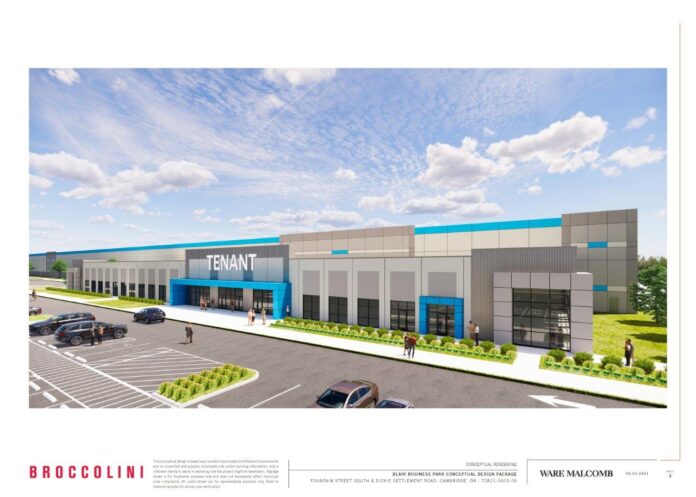 Developer and contractor Broccolini says it is starting preliminary work on a Cambridge warehouse distribution centre that filings with the City of Cambridge indicate will have a building permit value of more than $54.5 million.

Broccolini said in a statement last Friday that it has received necessary permits to perform grading work from the City of Cambridge and the Grand River Conservation Authority. City of Cambridge documents indicate the company has requested its support in obtaining a Minister’s Zoning Order (MZO) for the project at 140 Old Mill Rd., speeding up the development process.

A formal site plan application will be submitted in the coming weeks before the official groundbreaking will take place, Broccolini says.

“This is another Broccolini project that will help the economic recovery in Ontario by creating hundreds of jobs during construction and over 500 long-term jobs when it opens,” James Beach, Brocolini’s vice-president of real estate development, said in a statement. “We’re proud to participate in the local economy and help create commute-free employment opportunities for residents in the Cambridge area.”

Documents from the City of Cambridge relating to the MZO application indicate that the city expects to receive $1,090,982 in building permit fees and $5,968,742 in development charges based on the city’s current rates. As the permit rate for Cambridge is $20 per thousand, this indicates the project will have a building permit value of $54,549,100.

The site plan application for the proposed development will include studies and impact assessments covering all aspects of the project, from noise, traffic and road improvements to groundwater recharge and wetland preservation, heritage policies, landscaping and buffering, and municipal servicing, Broccolini says. Each of these elements will be subject to approval by the City of Cambridge and by the various concerned agencies before a building permit can be issued.

“This is an ideal location for a warehouse distribution centre, as it has direct access to the 401, and has already completed the public consultation process to be designated for industrial use,” said Delis Lus, Broccolini’s vice-president of real estate development. “We intend to build a state-of-the-art facility that meets the highest environmental standards, both in terms of construction and ongoing operations.”

The 49-acre plot of land at 140 Old Mill Rd. and the neighbouring properties at 128, 134 and 228 Old Mill Rd., totalling more than 61 acres of developable land, are all owned by the Broccolini entity 140 Old Mill Road LP. This area has been identified by the City of Cambridge for industrial business park use since 1999.

Numerous public consultations were held earlier as far back as 2012 when establishing the region’s Official Plan, the City’s Official Plan, the Cambridge Blair Area Special Study, the Blair Village Heritage Conservation District Plan, and the Millgate Subdivision consultation, Broccolini says. Broccolini has received the support of the Cambridge City Council to unify the zoning on the entirety of the purchased land, which currently has near identical (M-1) zoning in place, and to develop it as a single unit.