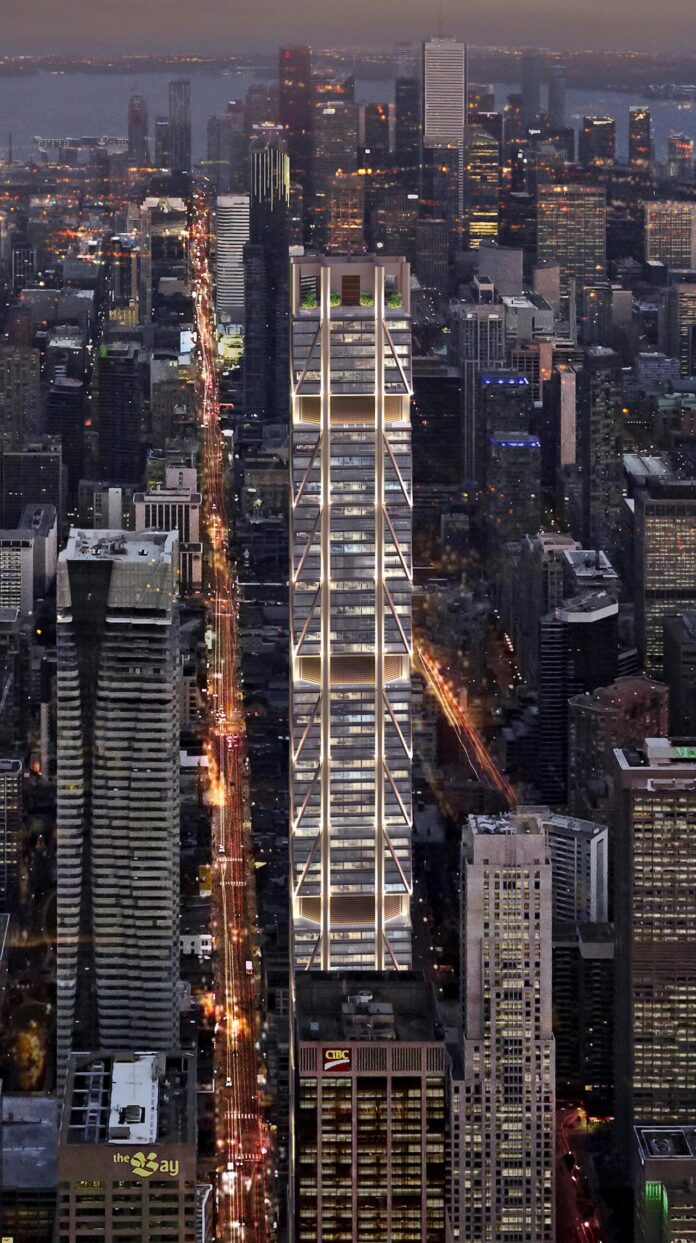 Above ground construction is about to start on a condominium development that will become Toronto’s tallest building – located at One Bloor West.

Work was stalled by permit issues for more than a year on the 85-storey project that will include high-end residential units, restaurants, event spaces, hotel and retail space.

Toronto City Council passed a motion in June directing the city solicitor to request the reversal of an LPAT order with amendments to allow an above-grade building permit to be issued prior to the conveyance of the 14 Dundonald St. park to the city. Early last month, the LPAT amended the Section 37 provisions, paving the way for above-grade permits to be issued.

The conditional above-grade permit was issued Aug. 31, removing the last obstacle for construction. Developer Sam Mizrahi is quoted by Urban Toronto: “The City of Toronto and Canada has just issued the highest/tallest building permit it has ever issued for a mixed-use development. We are all very excited, proud, and grateful to our teams efforts, as the building now begins to rise above the Toronto skyline.”

Below-grade “super-columns” that will support the hybrid exoskeleton structure, parking levels and the basement retail concourse level are essentially completed.

The building was designed by Core Architects and Foster + Partners and residential units will include three-floor penthouses expected to sell for more than $20 million.

The developer describes the building as “a poetic architectural statement of strength and lightness, boldness and delicacy, allowing beautiful, light-filled residences that are serene glass sanctuaries in the sky.”

Engineered to be six times stronger than a typical high-rise, according to Mizrahi, The One will “soar into the sky” at the corner of Yonge & Bloor, Canada’s most well-known and popular intersection.

According to the project website, the innovative structural engineering is a “hybrid exoskeleton”. Metallic trusses encase the tower on the exterior, providing much of its support. Many of the windows all the way up the tower open to the outside air.

Developers say it will be a landmark building – the tallest residential tower in Canada and the second tallest structure in Toronto next to the CN Tower.