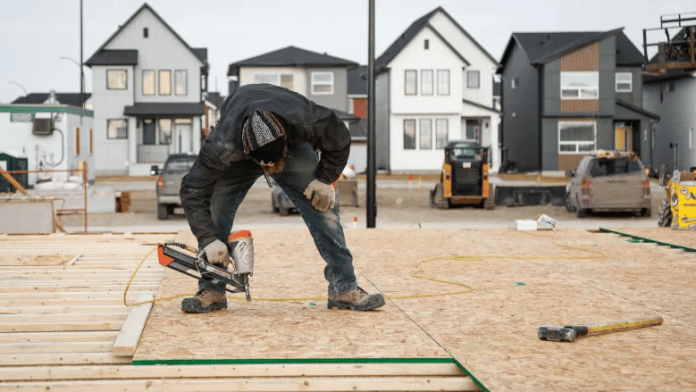 The Canadian economy stayed flat in May, with growth slowing down as businesses continue to face supply constraints and rising interest rates.

According to the report released on Friday, declines in May were experienced in the construction and manufacturing sectors, while transportation and warehousing saw the largest gains.

Statistics Canada said construction worker strikes in Ontario during May led to delays in projects. However, construction activity remained well above pre-pandemic levels.

Manufacturing contracted for the first time in eight months, with motor vehicle manufacturing stalled by a semiconductor chip shortage.

Transportation gains were driven by growth in air travel, which rose by 14.1 per cent.

On Thursday, the U.S. Commerce Department said the U.S. economy contracted for a second consecutive quarter, but CIBC economists expect growth to bounce back over the remainder of the year.

Real gross domestic product was unchanged in May after a 0.3 per cent expansion in April, Statistics Canada reported.

“We’re expecting growth to slow, but part of the reason for that is because the economy right now is incredibly strong,” Janzen said, noting that the economic recovery from the pandemic was much faster than expected.

After taking a significant hit at the onset of the pandemic, real GDP surpassed the pre-pandemic level in November 2021.

“We’ve reached a very strong point in the economic cycle, earlier than expected. But the challenge from there [is] it’s just not sustainable,” he said.

The strength of the Canadian economy will have implications on the Bank of Canada’s next key interest rate decision, as it aims to cool high inflation.

Earlier this month, the central bank raised its key interest rate by a full percentage point, the largest single rate hike in more than 20 years.

CIBC senior economist Andrew Grantham said solid annualized growth in the second quarter means the Bank of Canada will likely go ahead with another supersized rate hike in September.

“That solid growth, combined with the details of today’s data which suggests supply constraints, rather than slowing demand, were holding back overall growth, means that the Bank of Canada is still on course to deliver another non-standard rate hike at its next meeting,” Grantham said in an email.

The Bank of Canada will make its next interest rate announcement on Sept. 7.

RBC is forecasting two consecutive quarters of negative growth next year, which would meet the definition of a technical recession. However, Janzen said the downturn is likely to be moderate and given early signs that global pressures on inflation are easing, the Bank of Canada may start reversing rate hikes next year.

Janzen said he expects a half-percentage point rate hike in September, with the Bank of Canada eventually bringing its key interest to a high of 3.25 per cent before it starts reversing its rate hikes.