Canada posted its first monthly decline in jobs since April amid tightened public health restrictions in December, and economists warn the losses are likely to continue as the number of new COVID-19 cases continue to rise.

Statistics Canada said Friday the economy lost 63,000 jobs in December while the unemployment rate edged up to 8.6 per cent compared with 8.5 per cent in November.

Had it included in the calculations Canadians who wanted to work last month but didn’t search for a job, the unemployment rate would have been 10.9 per cent in December, unchanged from November.

“Due to both the continuing rise in virus cases to open the new year and the further curtailments of activity since the last survey, another month of job losses could be on the horizon in January,” CIBC senior economist Royce Mendes said.

“The weak jobs report, combined with the recent appreciation of the Canadian dollar, will put pressure on the Bank of Canada to ease monetary policy further.”

The report was a snapshot of labour market conditions for the week of Dec. 6 to 12. It noted that additional public health measures were put in place in many provinces after that period, which will likely be reflected in its January labour force survey results.

The job losses in December ended a streak of monthly job gains that began in May as restrictions put in place to slow the spread of the pandemic began to ease.

Full-time employment in December rose by 36,500, but there was a loss of 99,000 part-time jobs. Total hours worked also fell for the first time since April, with a decline of 0.3 per cent.

At its peak last spring, the COVID-19 economic shutdown directly affected 5.5 million Canadian workers, including 3 million who had lost their jobs and 2.5 million who were employed but had experienced COVID-related absences from work.

The number affected was 1.1 million in December, including a drop in employment of 636,000 since February and 488,000 more Canadians who were employed but working less than half their usual hours for reasons likely related to COVID.

December employment fell in industries most directly affected by the new and continuing public health measures.

The number of jobs in the services-producing side of the economy fell for the first time since April as it lost a total of 74,000 in December. The goods-producing sector gained 11,300 jobs.

The accommodation and food services industry lost 56,700 jobs for the month, while the “other services” category, which includes hair salons, laundry services and other areas affected by public health measures, lost 30,800. The information, culture and recreation group lost 18,800.

However, the manufacturing sector gained 15,000 jobs in December, driven by an increase in Ontario.

The share of Canadians working from home was 28.6 per cent in December.

Regionally, nine out of 10 provinces lost jobs last month. Ontario lost 11,900 jobs, while Quebec lost 16,800. British Columbia was the lone province to gain jobs with the addition of 3,800.

The December loss left employment in Canada down 571,600 from where it stood at the end of 2019, a drop of three per cent.

Financial data firm Refinitiv says economists on average had expected the report to show a loss of 27,500 jobs for December. The unemployment rate was expected to be 8.6 per cent. 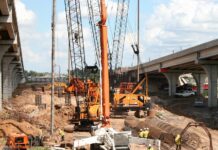 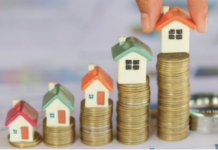 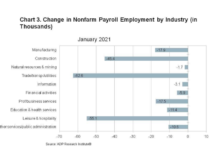