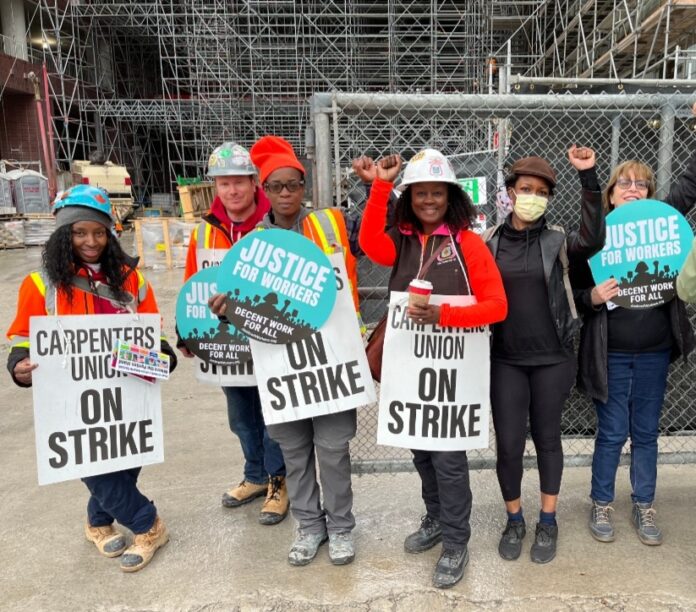 Ontario’s carpenters will return to work on Monday after ratifying a new three-year collective agreement for the industrial, commercial and institutional (ICI) sector.

Ratification votes have taken place around the province today and the tentative agreement was successfully passed in the vast majority of each of the 14 local unions involved, in terms of the “Double Majority” required to pass this support of locals was backed up by another vast majority of the membership vote, the Carpenters’ District Council of Ontario (CDCO) said in a statement.

“There was huge turnout from the UBC (United Brotherhood of Carpenters) members from one end of the province to the other with over 77% voting in favour of the new agreement,” the statement says.

“We would like to thank our members for staying so strong on the picket line over the last few weeks”, said Mike Yorke, the CDCO’s president and director of public affairs and innovation. “In the long arc of the Carpenters Union history in Ontario over the last 140 years (Hamilton local 18 ~ since 1881 and local 27 Toronto ~ since 1882) it’s always been the members that have determined the fate and the future, for themselves, their families and the next generation of workers. This strike and this result are in total alignment with that history”

This province wide agreement impacts 15,000 members in 14 Locals throughout the province in communities from the GTA to Sarnia to Ottawa to Thunder Bay.

Evan Reid of Thunder Bay local 1669 which is hosting the Canada wide National Apprenticeship Competition this weekend noted: “Our members spoke loud and clear across all generations- a main goal of the strike was to get a better deal for the next generation of carpenters – hosting the NAC here in Thunder Bay is the same goal – to recognize and value our next generation”

Rod Thompson, senior rep for Ottawa echoed these sentiments. “This agreement recognizes the crisis of affordability in Ontario and ever rising cost of living- the members fought for and achieved a better agreement by withdrawing their labour – now Monday its back to work and back to building Ontario,” he said.

“We expect that the employers will begin work as soon as Monday May 30th and with some specific projects needing time to ramp up to full production which we should see in the next week or so,” the CDCO statement said. “It’s great to have our 15,000 ICI members back at work building Ontario and driving the economy as we know we can.”