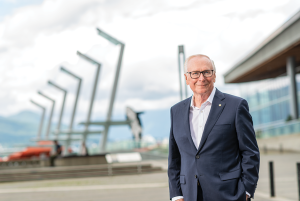 The Canadian Council for Public-Private Partnerships (CCPPP) has recognized David Podmore, founder and chair of Concert Infrastructure, with a 2021 Champion Award.

“David’s vision for P3s has touched every corner of the Canadian market,” said Brad Nicpon, Partner, McCarthy Tétrault LLP, and chair of the national awards committee. “He founded Concert, an important Canadian player in the social infrastructure space, brought pension plan investors into the P3 fold and advocated for use of the P3 model across the country within unique and challenging asset types.

“David had a remarkable vision of what the P3 model could achieve that others are continuing to follow to this day.”

The Champion Award is presented by the Council to individuals who have made an outstanding contribution to P3s in Canada. The 2021 awards are supported by gold sponsor McCarthy Tétrault LLP and silver sponsor Colas Canada.

“I am humbled and honoured to be recognized by The Canadian Council for Public-Private Partnerships, the Board of Directors and its members, and be amongst a group of tremendous leaders who previously won this award,” said Podmore. “It’s been wonderful to see the growth of the Canadian P3 market and to successfully deliver and manage the critical infrastructure projects that Concert is so proudly part of.”

The committee noted that Podmore had worked tirelessly to advocate for the P3 model and the need to build quality infrastructure across Canada. His vision of a pooled pension plan infrastructure investment vehicle also enabled small- to medium-sized Canadian union and management pensions (including building trades) to directly invest in Canadian P3 infrastructure.

In 1989, he co-founded Concert Properties to deliver assured rental housing on behalf of the City of Vancouver and the Province of British Columbia. In 2010, through David’s vision and relationship with Concert’s long-standing union and management pension plan shareholders, Concert Infrastructure was founded as an independent entity to directly invest in, develop and manage Canadian P3 infrastructure projects. Concert Infrastructure has since gone on to successfully deliver essential infrastructure projects across Canada. Jim King, Founder of EllisDon Capital was also honoured with a Champion Award.

King, retired in 2019 after a 38-year career with EllisDon. He helped pave the way for greater acceptance and innovation of the “made-in-Canada” version of the public-private partnership model. His approach had a tremendous impact on the way the first hospital P3s in Ontario were structured.