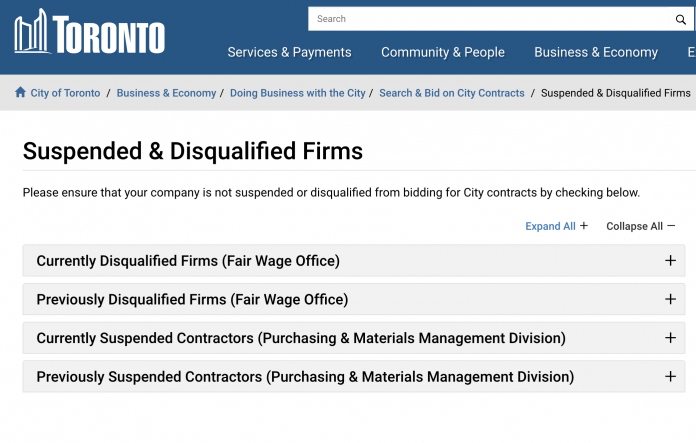 There are some lists where you don’t want to see your name, and the City of Toronto’s Suspended and Disqualified Firms certainly fits that category.

Ontario Construction News won’t publish the identities the affected companies but detailed explanations of the reasoning behind the disqualifications are apparent in the notices, which include links to background documentation explaining the reasons for the City Council decisions.

Disqualifications can occur when contractors have “been found to be in non-compliance with the provisions of the Fair Wage Policy in two separate instances over a period of three years inclusive,” the city documentation reports.

Among the Purchasing and Material Management Division’s disqualification reports, one contractor lost the ability to work with the city because “a supplier shall be deemed ineligible for an award for a minimum period of five (5) years from the date of a conviction of itself or its affiliated persons for collusion, bid-rigging, price fixing, bribery, fraud or other similar behaviours or practices prohibited under the Criminal Code or other applicable law, unless pre-approved by the Treasurer.”