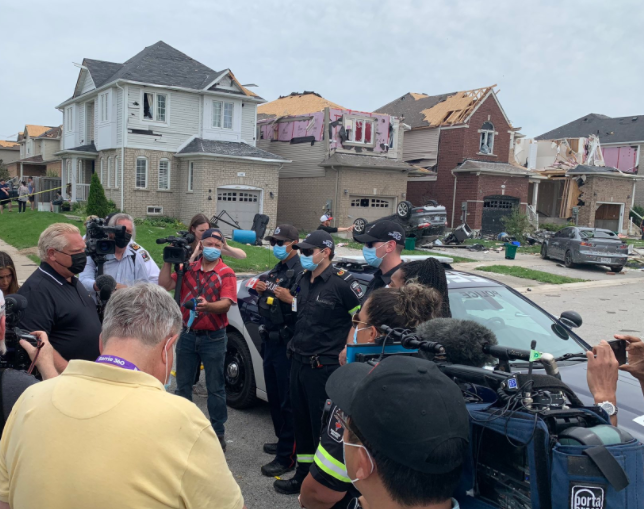 Less than 24 hours after a tornado touched down in a south Barrie neighbourhood, Premier Doug Ford arrived to tour the area and pledge to help residents if insurance companies don’t cover the costs of repairs.

“It’s a shock, it’s shocking, it’s heartbreaking,” Ford said as he stood on a street littered with debris.

“These people, within minutes, literally, their lives changed. But we’re going to get them back on their feet.”

Ford expressed relief, however, that no one had been killed in the disaster, calling it a “miracle.”

Uprooted trees, toppled fences, pieces of insulation, wood and roofing materials remained strewn on lawns and streets in the area. Ten people were injured as a result of the twister.

For some residents, the brief return home to fetch medication, possessions or pets highlighted the extent of the damage and its fallout, Barrie Mayor Jeff Lehman said.

“That’s one of the real difficult things about this morning, is folks finding that their lives are gone, their possessions are gone or heavily damaged by the storm,” he said in a video statement Friday morning. “But the cleanup efforts are beginning.”

The mayor said that 10 people were taken to hospital after the tornado, and all but two had been released as of Friday afternoon. He said none suffered life-threatening injuries.

More than 100 people had been displaced, Lehman said, but the number could grow because some people went to stay with family and may not have reported their situation to the city yet.

Environment Canada has given the tornado a preliminary rating of EF-2, meaning it had maximum wind speeds of 210 kilometres per hour. The damage path was about five kilometres long and up to 100 metres wide, the weather office said.

A community clean-up was being organized for today, with volunteers expected from across the city to assist residents in the impacted neighbourhood.

Lehman says the destruction is familiar to Barrie residents who remember the 1985 tornado that killed eight people and injured more than a hundred others in the city. Hundreds of homes in the Allendale neighbourhood were destroyed.

“The scenes today are reminiscent of it,” Lehman said. “I lived in that neighborhood as a boy. I mean, it’s shocking, you know, you never expected to see it again.”