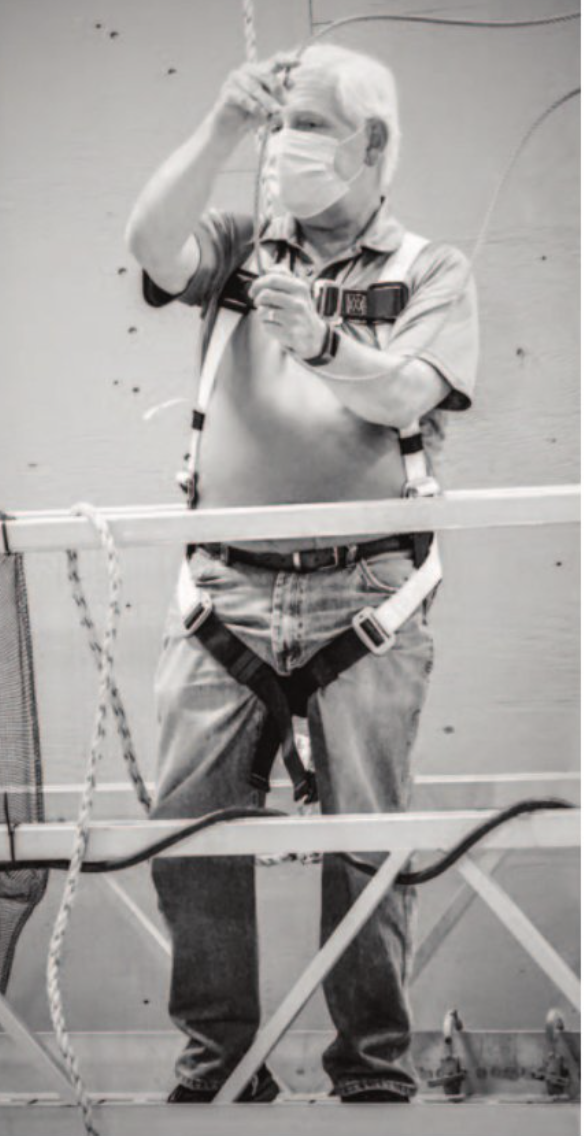 The boom of the construction industry through the COVID-19 pandemic has heightened the demand for safety training and Construction Workplace Safety Training Limited (CWST) is meeting that demand with new and expanded programs.

John Ridler joined CWST in 2019, and since then he has revised and continues to help grow the Suspended Access Platforms program. Suspended Access Platforms are commonly referred to as “Swing Stages” used in high rise maintenance and construction applications such as glass application, window washing, structural repairs and equipment installations.

He is also currently the instructor for the Scaffold Awareness Course. The Scaffold Course helps learners to understand safe use of different types of scaffolding systems, the erection and dismantling of the equipment to prevent injury.

Ridler was introduced to the industry in 2006 and started full time with Scafom Canada in 2008.

John built the Swing Stage course through his practical experience in installation and user formats, his knowledge of the Ontario Occupational Health and Safety Act helped to extend the scope of learning experienced by participants. It’s since kindled and re-kindled a strong response from existing and new clients using this equipment, and CWST is currently looking to expand their Suspended work programs to include Boatswain’s (Bosun’s) Chairs, commonly used in window washing applications for high rise buildings.

“Our Suspended Access program at CWST has developed into an excellent program giving new users the knowledge, experience and confidence to use a swing stage,” he said. “I have received a lot of positive feedback from seasoned users about the quality of our program. Perhaps you can teach and old dog a few things. Our Suspended Access program is getting a lot of recognition and has kept me quite busy, even during Covid shutdowns.”

There are currently 2 Swing Stage Courses available to book with CWST, one is for users, and the other is more advanced for installation of equipment.

“John has successful developed and grown the swing stage courses and the training has grown significantly through the pandemic, drawing participants from all across the GTA and throughout Ontario,” said CWST director Craig Nicholson.

“It’s another value-added course that strengthens the diversity in CWST and supports our reputation being a preferred provider in technical training. It’s great to have John with us, he’s easy to work with, has a passion for the work he does and that comes across clearly in all of his training sessions. He has an exceptionally calm demeanour, and when you hear him start talking about the work he does, he’s not a guy that like to skirt detail. When you’re up that high off the ground, those little details become pretty important.”

“I was never comfortable with heights, and started there doing carpentry and equipment servicing,” said John. “Because of my aptitude and desire to learn new things and problem solve I was brought into the hoist repair shop. I grew into that position and later ran a team of 4 hoist mechanics, working closely with the manufacturers, suppliers, and workers on construction sites.”

His responsibilities included managing service calls when customers had problems with their stage, gaining experience on “broken” stages, trouble shooting the issues and solving problems.

“My duties at Scafom continued to grow, encompassing the other stage components and eventually was promoted to a supervisory position for the swing stage division at Scafom. I also had to develop a good understanding of scaffold, Scafom’s other division, working with the design engineers and erection crews. Swing stages are actually considered a specialty “suspended scaffold” system.”

A tragic swing stage accident in Toronto in 2009 where four workers died, and a fifth suffered serious injuries brought about significant changes for fall protection with the launch of the Working At Heights program in 2015. That same incident affected the swing stage industry and in 2017 the Ministry of Labour strengthened regulations to improve safety for swingstage users.

CWST has two units on King Street in Barrie, Ontario, one of which is dedicated to swing stage systems and scaffolding. Many providers don’t have equipment to train workers, their courses are mostly awareness and theory based. This is a distinct advantage for CWST in many cases where equipment increases a stronger sense of kinesthetic learning (hands-on learning), versus theory or a visual presentation such as a typical PowerPoint and handout.

“I enjoy getting “into the trenches” with workers and have seen a distinct change since I started the audits,” he said.

“In the beginning workers would flee . . . suddenly it was coffee break as soon as the safety guy arrived on site. Now I find workers seeking out my ideas and my advice when I am on site. Although I do report infractions to site management, the workers have adopted me as their ally. My goal is the safety of all workers, and this seems to present itself both in the classroom and on site.”