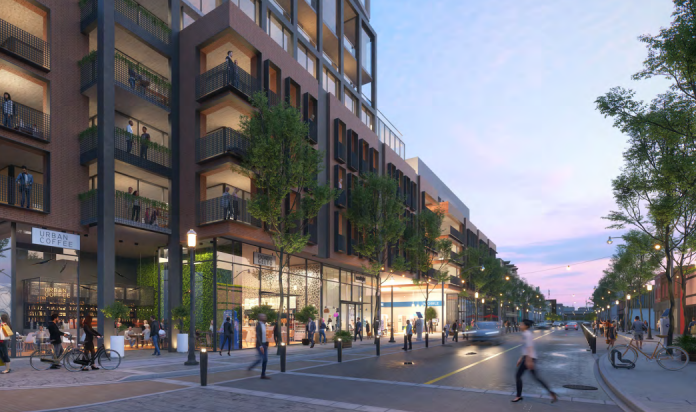 A proposal to build two 30-plus storey residential towers and transform a large section of downtown Barrie jumped a hurdle on Monday.

Barrie Waterfront Developments received approval for a zoning-bylaw amendment for several properties located at 39-67 Dunlop St. W. and 35-37 Mary St. – most of the south side of Dunlop Street West, east of Mary Street and west of Maple Avenue.

Barrie councillors approved the plan without discussion at a general committee meeting and will likely give final approval at a council meeting next Monday.

Kevin Bechard, principal planner from Weston Consulting, made a presentation last June on behalf of Barrie Waterfront Developments and he labeled the design “a departure” from traditional highrises, highlighting a “slender build form with a pointed tower.”

“This development will also introduce a new landmark for Barrie, in terms of its downtown and its skyline,” he said. “These are tall buildings for Barrie, at 30 and 34 (storeys), but I think the future is heading in that direction.”

The two towers would be connected by a six-storey podium. There would also be five storeys of above-ground parking. A walkway would be built between the buildings to provide access to the bus terminal and waterfront.

“We’re not putting up a wall of building along Dunlop Street,” Bechard said. “It’s intended to provide a connection to the waterfront and accessibility through the building itself.”

It’s a phased plan with the 30-storey tower to be built first, followed by the 34-storey structure. The mixed-use development includes two residential towers atop a seven-storey podium, a ground floor retail/commercial area and 495 parking spaces on Levels 2-6.

The residential units will include one, two and three-bedroom options.

Residents attending a public meeting last summer were divided – some in favour of the redevelopment and others concerned that historic buildings will be lost.

Wendy Cook is a long-time downtown resident and she says the plan “could take a blighted neighbourhood and turn it into something really beautiful.”

Resident Cathy Colebatch said the development is exciting, but “I just wish it wasn’t in that block where we potentially have to demolish an entire block of heritage or century-old buildings,” she said.

About a dozen businesses would be affected.

“I’m not really interested in working just for the sake of working,’ he said. “I wanted to do something special. We were looking for somewhere we could add some value.”