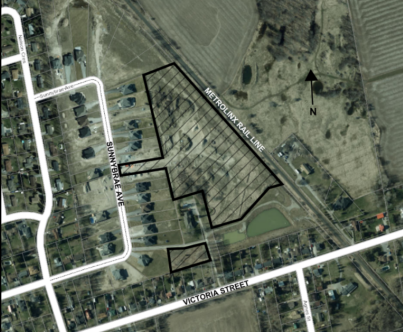 The Town of Innisfil’s deputy mayor is raising concerns about a new subdivision being built close to GO Transit train tracks in Stroud.

“Yes, I understand it’s going to be in their deeds when they read it, but let’s face it, a lot of people really don’t read their deeds,” Dan Davidson said at a recent council meeting. “We’ve dealt with this down in Lefroy. … They move into the house and the next thing you know we’ve got a complaint. They want to stop the whistles.

“Well, you got the house a little cheaper because it is where it is.”

Davidson says it’s up to real estate agents to “make sure the people are fully aware, but you can guarantee two years from now we’ll have someone complaining they want the whistles stopped or the house is vibrating.

“It’s unfortunate we have developments so close to these tracks, but it seems to be the norm,” Davidson said. “So, be prepared, that’s all I’m saying.”

According to a staff report, the development has been designed to “create as much separation between the lots and a nearby rail line as possible and will include noise clause warnings for future purchasers.”

Plan of Subdivision and Zoning By-law Amendment applications for the area that was reserved for future development when the first phase of the subdivision was originally draft approved in 1989 for 30 lots, and subsequently redlined in 2006, 2012 and 2013 increasing the number of lots to 38, removing a park block and consolidating stormwater management blocks.

The developer will provide cash in lieu creating parkland, similar to the draft-approval process with the developer for the first phase of construction.

Mayor Lynn Dollin, however, said specifying cash in lieu provided by any development must stay in a specific community could be a “dangerous precedent” for the town.

“Then you get Alcona saying, ‘we don’t want any of our money going anywhere,’ and then you get Lefroy saying it and Churchill saying it,” Dollin said at a council meeting.

“Then, the treasurer’s office is managing 14 different accounts for park dedications and all divvied up, you don’t have the mass you need to do the big projects, because there are bits in each pocket.”