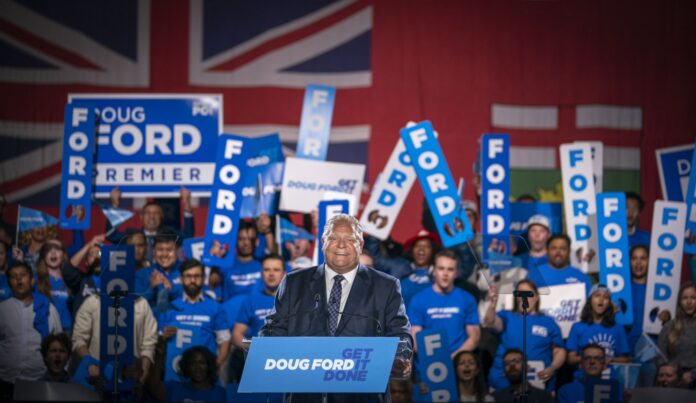 LiUNA was the first out of the gate with an endorsement for Ford at the start of the campaign. Since then, seven additional unions have endorsed the Premier and his party including the International Brotherhood of Electrical Workers (IBEW), Ontario Pipe Trades Council (OPTC), both of which have supported the NDP in the past. The International Union of Operating Engineers (IUOE) and International Union of Painters and Allied Trades (IUPAT) supported the PCs official just days before the election.

Ford and his former ministers travelled the province over the past month, repeatedly pledging support for skilled trades and apprenticeship programs, building infrastructure – highways, hospitals and 1.5 million new homes over the next decade.

Monte McNaughton, the Minister of Labour in Ford’s previous government was also re-elected last night. Prior to the election call in early May, McNaughton was the face of the PCs ‘Working for Workers’ agenda and had announced an increase to the minimum wage, ‘right to disconnect’ legislation, and strategies to ensure trades unions are overseen by a body that represents them through Skilled Trades Ontario.

“I’m not gonna judge any other party. I’ll tell you, our families, be it my dad or my brother Rob or (nephew) Michael, we’ve supported the hard-working women and men in this province, the union members,” Ford said at a campaign stop at IUPAT’s headquarters.

In 2018, Ford promised Ontario would be “open for business” and that he would usher in an era of “economic growth and prosperity.”

This time around, he focused on the building of new infrastructure including Highway 413 and the Bradford Bypass, in addition to new hospitals and long-term care.

With another majority government elected, plans to build the Bradford Bypass and Highway 413 are expected to go ahead.

The Bradford Bypass is a proposed 16.2-kilometre controlled access freeway connecting Highway 400 and Highway 404 across Simcoe County and York Region.

AECOM Canada Ltd. (AECOM) was contracted to complete a project-specific assessment of environmental impacts for the project.

Brennan Paving and Construction, a subsidiary of the Miller Group, will build a bridge for the Bradford Bypass, the Ontario government announced last week.

The scope of work includes bridge construction, to reroute Yonge Street (County Road 4) to cross the future freeway between the 8th Line and 9th Line and widening County Road 4 from two to four lanes.

Construction is scheduled to start later this year and be completed by late fall.

“Our government is saying ‘yes’ to building the roads, highways and public transit needed to unlock our full economic potential and keep our province moving forward,” Premier Doug Ford said in a news release in April. “As we attract more skilled workers to Ontario, we need to build more roads and highways to keep up with population growth.”

A recent poll commissioned for the Ontario Provincial District Council of the Labourers’ International Union of North America (LiUNA), found 57 per cent of people in the Greater Toronto Area supported Highway 413 running 52 kilometres from Highway 400 in Vaughan to Highway 401 near Milton.