Many of the roofs blown off houses by a tornado in Barrie on Thursday afternoon could have stayed in place if they were built to code, says an investigator with the Western University Northern Tornadoes Project (NTP).

“We saw significant damage, but some of it was preventable,” Gregory Kopp said in an interview with Ontario Construction News. “If everything had been done correctly, there would have been less damage. We have evidence of the missing nails and that’s unfortunate.

“This is an issue of construction quality and does not meet the building code. Someone needs to emphasise it because it’s a life safety issue.”

Kopp, a civil and engineering professor at Western, is calling for building code changes and a review of damaged homes in the hardest hit Barrie neighbourhood.

An NTP survey team began a damage survey in south Barrie Thursday evening, working collaboratively with Environment and Climate Change Canada. They saw about 20 homes with roofs off, others with walls torn away and a couple where the second floor had collapsed into the main floor.

Kopp said he found in many cases that “there were no nails holding the roof onto the walls” and “a lack of following the building code.” He believes some of the roofs would have stayed in place if the houses were built to code.

The tornado’s damage path was about five kilometres long and up to 100 metres wide. After hitting south Barrie, it may have continued  toward the Friday Harbour development in Innisfil and over Lake Simcoe. NTP and ECCC investigators determined a preliminary rating of EF-2 with wind speeds up to 210 kilometres per hour.

His message for builders? Details matter.

“Housing is complicated from an engineering point of view,” he said. “We rely on the toe nails to be there and they are difficult to put in correctly. When we talk to the builders, they don’t seem to think that it’s that necessary. It’s not the top priority on their list, unfortunately.”

“Details matter. This particular detail matters. It’s critical that the toe nails are put in and put in correctly. Hitting the trusses with the nails and not missing is important. Those nails matter.”

In Barrie, Kopp says attention to detail would have saved some houses.

For example, at one home where a garage door was blown in, Kopp says he found proper anchors for the walls, but they “were improperly placed in the foundation so lacked strength.”

Reflecting on damage he saw last week in Barrie and across Ontario and Canada after tornadoes, Kopp says he often sees not enough nails securing roofs into trusses — houses that contravene building codes.

The house that Barrie city councillor Natalie Harris was in lost its roof and she documented her experience emerging from the basement to see the sky.

“Not even 30 seconds after we got to the basement we could hear the tornado was above us and the house was shaking, the beams were shaking.”

Kopp is urging the provincial government to enhance the Ontario Building Code to make it mandatory for new homes to be constructed with hurricane strapping that would keep roofs on homes during similar types of tornados.

With new rules, damage would be mitigated in EF-2 tornadoes by adding hurricane straps to hold the roofs down, and improving certain nailing patterns, he said.

The Institute for Catastrophic Loss Reduction estimates the cost to add hurricane straps to a house during new construction is about $200.

NTP, founded in 2017 by Western University and ImpactWX, aims to detect and document all tornadoes in Canada and uncover Canada’s true tornado climatology.

“Roof failure and what we saw there we have seen before in other tornadoes,” Kopp said.

“This issue of roof to wall connections is a detail that’s not intuitive to understand and not emphasized by inspectors. I don’t want to cast too much blame on the construction industry

In 2014, a tornado hit nearby Angus and a row of about 10 houses lost their roofs.

Kopp believes the use of hurricane straps for new construction should be mandated in the Ontario Building Code.

“We have interacted with wind across North America for a long time and when you talk to builders and building inspectors in the U.S. they talk about how in Canada nobody is really considering wind in the building codes. That needs to change.

“In Barrie, here still would have been damage, but I believe more people would still have their homes today.” 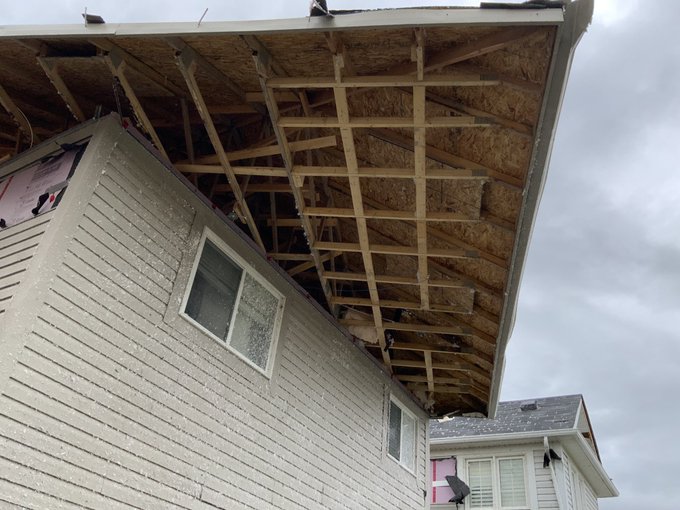