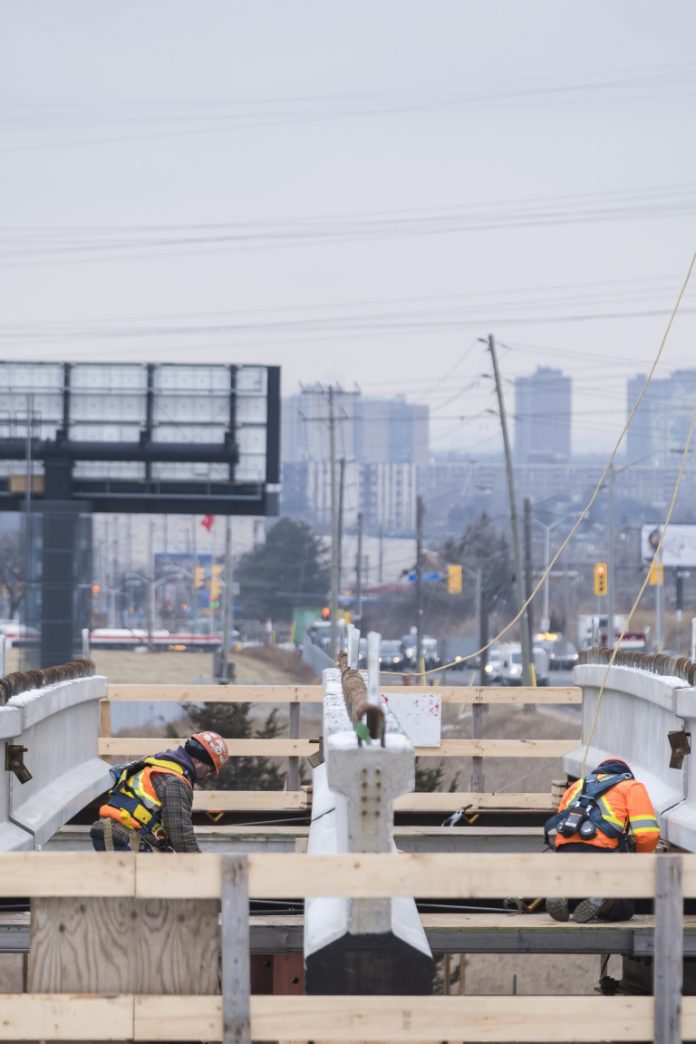 According to the Metrolinx blog, recent work on a Highway 400 bridge shows how fast – and efficient – advances in construction engineering tactics have become.

“Tackling work on existing bridges – especially those around a busy area – is often among the most difficult construction feats,” Erika D’Urbano, Metrolinx senior advisor says in a news release.

The ‘rapid bridge replacement’ method allows bridges to be replaced with minimum disruption to traffic. Instead of demolishing and removing the new decks in live traffic, the team reduces traffic impacts by first constructing the new decks on large steel scaffolding beside the highway.

This time-lapsed video produced by Metrolinx shows Finch West LRT constructor, Mosaic Transit Group, receiving large steel beams – or girders – that build the framework for the bridge. The girders are then hoisted in place on scaffolding that has been set up beside Highway 400.

The girders will be used in the construction of two new bridge decks for horizontal support the decks will be constructed on the elevated scaffolding –so that when complete they can be easily lifted into place. – Each of the new decks are 40-meters-long by 25-metres-wide and 15,000-tonnes on the scaffolding.

“This innovative technique will help in reducing the number of traffic disruptions to motorists from years to a couple weekends and night lane closures,” D’Urbano wrote in the release.

The Alstom LRV mock up made its Finch West debut over the summer with appearances at a handful of festivals in the community. The mock up is a representation of what the real vehicle will look like once the new transit line is complete in 2023. You can catch the vehicles’ next arrival at community events on the Finch corridor next summer.