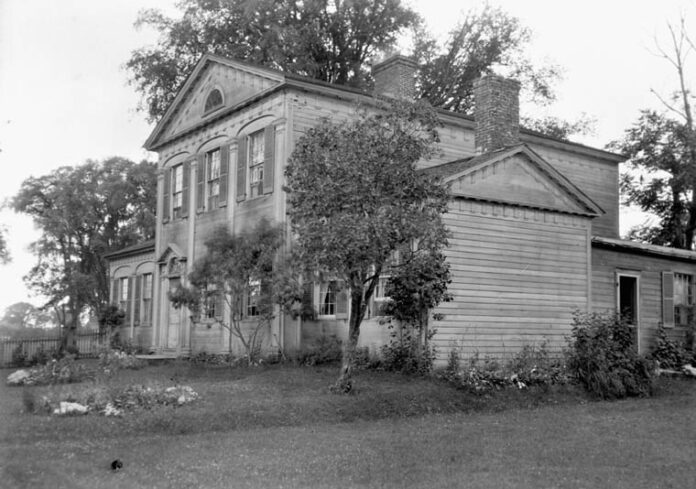 “We are witnessing the decay of popular art in rural Canada—the art that produced the carriage, the cottage, the churn, the cider press, the horses on a merry-go-round and a hundred other things that once delighted the eye,” stated Eric. R. Arthur. His words from July 1946 resound in today’s construction trade.

“Life is more rushed and more competitive than it was one hundred years, or even half a century ago,”  he wrote.

After engaging in Modernism, Arthur turned to historical architecture and co-founded the Architectural Conservancy of Ontario (ACO).

Completing military service, Eric Arthur (born 1898, New Zealand) enrolled at University of Liverpool’s School of Architecture in 1919. As he progressed, the talented young man won scholarships and prizes. On graduation, Arthur joined the firm of Lutyens and Webb in London, England, assisting on major projects. In 1923, the University of Toronto recruited Arthur to teach design.

At the School of Architecture, “Arthur was among the first in Canada to teach the Modern movement, setting the stage for contemporary architecture,” said Angela Carr in The Canadian Encyclopedia, September 18, 2018. Appointed assistant professor, Arthur encouraged the establishment of scholarships and prizes, plus annual events with prestigious lecturers.

Receiving his professional licence in 1929, Arthur formed partnerships with several busy architects. “His most prolific corporate commissions were those undertaken for Canada Packers,” said Carr. The industrious architect completed “20 in all between 1929 and 1965.” The modern design for Edmonton’s Canada Packers plant won the Gold medal at the 1937 Exhibition of Architecture and Allied Arts.

Historical buildings intrigued Arthur, captivated by the beauty and charm of small homes and churches. They were “quite as fine as any on this continent, in fact, some are as good as the best work of the Georgian period when, in domestic architecture, the general standard of taste was higher than in any other period in history,” Arthur stated, according to Stephen A. Otto in “Eric Arthur’s Recording of the Early Buildings of Ontario” (JSSAC, Vol. 42, No. 2, 2017).

Launching a decade-long project in 1926, Arthur and students measured buildings throughout Ontario regions, then prepared architectural drawings. Hundreds of plans were completed. As well, a photographer captured “850 photographs of early Ontario buildings and their details,” Otto said.

Assembling the works, Arthur “donated the collection to the Archives of Ontario in 1959.” Unfortunately, no student or photographer names were credited, only that of Eric Arthur.

Visiting Barnum House in Grafton, Arthur purchased the early-1800s home in 1932 as a preservation project. (The village was rich in heritage homes.) Concluding the restoration would be too expensive for his budget, the architect devised a plan. “Now that we had an unpainted house and a ruinous barn on our hands, it was obvious that something more had to be done and, at a meeting in Toronto, the Conservancy was born,” ACO described.

The next year, Arthur, Vincent Massey, John M. Lyle, and others, founded the Architectural Conservancy of Ontario, “to advocate the protection and conservation of Ontario’s architectural and landscape heritage,” noted Archives of Ontario, with the goal “to preserve buildings, structures and places in Ontario deemed to be of architectural merit, natural beauty or historic interest.” Barnum House was the first intervention project.

In 1939, the ACO purchased the Grafton property from Arthur and restored the neoclassical timber frame house constructed by Eliakim Barnum in 1819. Barnum’s home was built overtop of the burnt remnants of a previous house, built there by James Norris seven years earlier.

Clad in flushboard and clapboard, Barnum House was constructed with “a two-storey centre block and two one-storey symmetrical wings,” according to Canada’s Historic Places (CHP). “The centre block is decorated with pilasters, elliptical arcading over the second storey windows and a pediment with a false fanlight.” Settlers from New England brought the Neoclassical style north to Canada, featuring enriched cornices and tympanum fans.

Inside, the home enjoyed a fireplace in each wing. “The kitchen’s cooking fireplace and bake oven cover nine feet of the south wall,” said CHP. “The large room on the second floor was used as a ball room, and has three windows overlooking the property.” Heating stoves were installed in 1840.

The history of Barnum House interested Ontario Heritage Foundation archaeologists. Launching excavations in 1982, the team found over 36,000 items. “Artefacts dating from the Barnum period indicated that the family lived an elegant lifestyle from the 1820s to the 1850s.”

A museum and fine exemplar of historical architecture, Barnum House remains the pride of ACO’s restorations. With branches throughout Ontario, the organization operates through grants, donations, and fundraising events.

Leaving a legacy of architectural works and books promoting historical design, Eric Arthur died in 1982. Among awards, the prominent architect was made a Companion of the Order of Canada in 1968.

© 2022 Susanna McLeod. McLeod is a Kingston-based freelance writer who specializes in Canadian History.