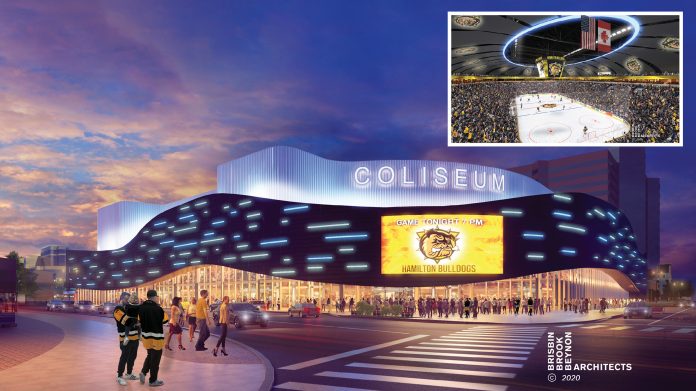 Council called the decision “historic”. Next steps in the development process include negotiations between the City and the Precinct Group to create a “Master Agreement”, expected to be finalized in late 2020. The completion of this “Master Agreement” would see arena renovations beginning in the Fall 2021.

“The Precinct Group’s proposed revitalization plan lays the foundation for a world-class entertainment precinct, right in the heart of downtown Hamilton, that will drive additional tourism and serve as a premier sports, entertainment, and cultural centre for all Hamiltonians,” Mayor Fred Eisenberger said in a press release. “On behalf of Council, I would like to thank the Precinct Group, Vrancor, and all other private sector entities that participated in this process.”

According to the city’s announcement, Precinct Group will assume capital costs for the renewal, take over responsibility for the operations and maintenance of the FirstOntario Centre and the FirstOntario Concert Hall for a period of 99 years and of the Hamilton Convention Centre indefinitely, without any monetary contribution from the city.

“While our Precinct Group is proud to have been recommended in this process, we want to extend our thanks and appreciation to our competitor. Both proponents have demonstrated a significant commitment to the urban core, and we look forward to working with the Vrancor Group in helping urban Hamilton reach its ultimate potential,” said P.J. Mercanti, Precinct Group President and Carmen’s Group CEO.

In a 2019 study completed by Ernst and Young, the elimination of the city’s ongoing subsidization and capital commitments at its entertainment assets would provide Hamilton taxpayers with $155 million in savings over the next 30 years. The city’s contribution to this initiative involves city-owned lands in the downtown core and deferrals of a portion of any additional property taxes resulting from the new developments.

Fans will have access to premium amenities like a microbrewery, suites, and hospitality clubs. Fans will also have year-round access to the experience through street-level hospitality activations on York Blvd. and Bay Street. The management of the transformed arena will pursue global partnerships to supply top touring artists and live events in the facility.

In addition to the comprehensive arena transformation, the plan also includes over $16 million in capital upgrades to the existing Hamilton Convention Centre, FirstOntario Concert Hall, and Art Gallery of Hamilton. As well, an estimated $340.5 million in auxiliary mixed-use development, including affordable housing, will be part of any residential developments that stem from this initiative.

“The transformed arena will be a destination for sports fans, music lovers, and families, creating a first-class guest experience in the urban heart of the Greater Hamilton area. We also look forward to working with the Hamilton Bulldogs to ensure they have a modernized facility to call home for years to come,” Eisenberger said.