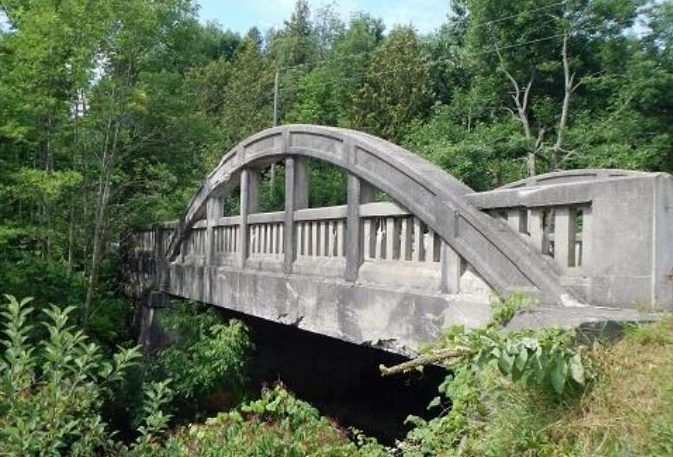 The end of the road has arrived for the Orchardville Bridge, a heritage bowstring arch design spanning the Beatty Saugeen River in Grey County, just east of Highway 6 and near the community of Holstein.

The bridge has been closed to vehicular traffic since 2009 as it is in a state of disrepair, although it is still used by pedestrians. Deemed too costly to repair, its fate was sealed at a council meeting (Feb. 27) when a recommendation to have it removed was approved at a cost of $127,500.

The bridge is located on the border of Southgate and West Grey on Orchardville Sideroad, about 72 metres from Highway 6. The recommended option was to remove the existing bridge with full recording and documentation of the heritage structure.

“In 2016, Township of Southgate Staff informed Grey County that the Ministry of Transportation was divesting itself of a portion of Orchardville Sideroad. This property was to be transferred to the adjacent property owner,” writes Pat Hoy, Director of Transportation Services, in a staff report.

“This created concern for Grey County as any future access to the structure would only be from the north. To that end, Grey County was attempting to acquire an easement across the property for any future south access. Grey County GIS still shows the property in the possession of the Ministry of Transportation.”

Because of the poor condition of the bridge, and the arduous nature of the agreement process, staff decided that removal of the bridge was the most fiscally responsible option, because:

According to Ontario Ghost Towns, the community of Orchardville dates back to the mid-1800s when Grey County was being settled. Its population hit about 150 around 1870, but began to decline when the 20th century dawned with records showing the population of the village dropping to 50.

The bridge, which has a deck length of 15.6 metres, is one of two remaining bowstring arch structures in Grey County. It was constructed around 1928 and the builder is unknown. The bridges no longer meet code requirements. In April 2017, GM BluePlan and Scarlett Janusas Archaeology Inc. were retained to do environmental assessment work and complete a built heritage and cultural heritage assessment. The subsequent study, the Cultural Heritage Evaluation Report (CHER), found the bridge to have some cultural heritage value.

“While Conservation Option 8, removal of the heritage bridge with salvage of elements for incorporation into new structure for future conservation work or displays could be considered, based on the condition of the concrete structure, this would not be technically or economically feasible,” writes Hoy in the report.

“Further, the Grey County Historical Society did not indicate that the preservation of components (or elements) from the existing structure was of interest. Therefore, Conservation Option 9, removal of the existing bridge with full recording and documentation of the heritage structure, is considered appropriate for this undertaking. As such, impacts to this heritage resource are expected.”

It was recommended that GM BluePlan continue to be retained as the consultant to complete the removal construction drawings.