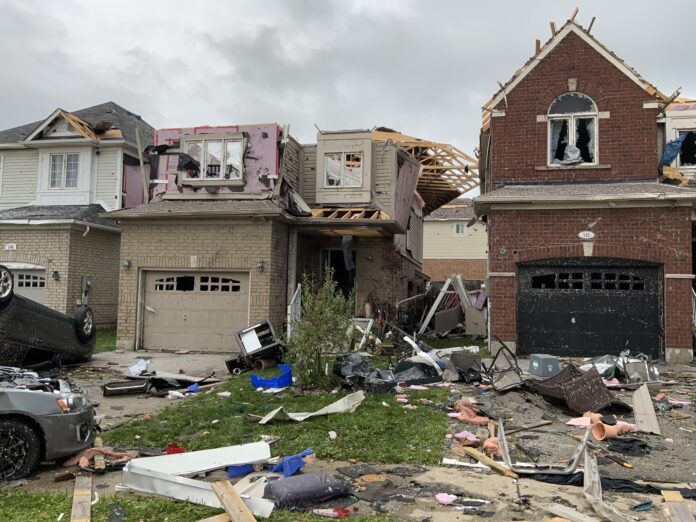 Six EF-2 tornadoes that hit southern Ontario on July 15 caused $75 million in insured damages, according to the Insurance Bureau of Canada.

The Barrie tornado, with maximum winds of 210 km/h, was the most damaging and injured 11 people.

“Our thoughts are with those whose lives have been disrupted and whose homes have been destroyed,” said Kim Donaldson, Vice-President, Ontario, Insurance Bureau of Canada (IBC). “We’re beyond thankful that this storm did not lead to any loss of life, which is the most important thing. Homes, cars and businesses can be replaced and fixed, but the same cannot be said of lives.”

Damage caused by wind is typically covered by home, commercial property and comprehensive auto insurance policies. IBC reminds residents that the insurance industry is committed to assisting its customers throughout the entire claims process for this and any other severe weather event.

“Insurers have been in the community since day one, working hard to help their clients throughout the entire claims process, and will be there until all policyholders have been looked after,” said Donaldson. “Your insurance representative is on your side and is committed to helping you through this devastating event.”

Western University engineering professor Greg Kopp conducted a damage assessment of the Barrie neighbourhood and he says the damage in Barrie could have been reduced if hurricane clips were installed. He inspected the area following the storm and identified several examples of homes not built to code, he said.

Kopp and Glenn McGillivray presented their findings in a webinar on July 28, confirming that about 25 roofs were blown off Barrie houses.

“Hopefully a takeaway . . . is that you understand that we could probably mitigate much of this damage with some fairly simple measures,” Kopp said, highlighting a house where the roof slid off the walls, another where the first floor collapsed and a third where the roof and most of the walls on the second storey were gone.

Construction issues identified in the webinar included missing nails and toenails installed incorrectly – issues that was also prevalent in a tornado that hit Angus in 2014.

“The Building Code in Canada requires the roof trusses to be fastened to the top of the wall with toenails,” Kopp said, explaining the process of angling three nails to attach the roof to the wall.

“It’s really important for holding the roof to the walls,” he said. “Wind causes uplift on the roof … the same physics that gets an airplane into the air.”

“So, what is arguably the most important structural component in a house is the weak link – the toe nails,” he concluded. “And it gets worse than that. Toe-nails are often not installed correctly, or at all.”

The Barrie tornado raised the issue of construction quality, he said, pointing to one house where the roof was still on the walls, but had slid away from its proper position. His photographs show that at least one toe-nail is missing from the truss.

“This came off earlier than it should have, and it may have stayed on – who knows – if the nails had been there.”

On the other side of the roof, each truss had just one nail where Kopp said there should be three.”

“This is a weak link and it is weaker than it should be,” he said. “If it’s not done properly, it’s a major concern to me.”

The problem, he said is that builders use one nail to hold a truss in place and then sheathing goes on the roof and the truss is aligned easily. The framer needs to go back and place the remaining two nails.

“That seems to be the missing step,” he said, adding that hurricane straps would solve the problem at a cost of about $150 per house.

Canada must develop a comprehensive plan to close governance gaps and improve climate defence overall, including enhancements to the current building code to protect against severe wind events. IBC is committed to working closely with the private sector and governments to improve Canada’s preparedness for and resilience to severe weather events, Donaldson said.

Drone imagery has shown that the tornado in Barrie travelled 12.46 kilometres and stretched about 510 metres wide.

It started just west of Highway 400 where the first damage was found and then closely followed Mapleview Drive several kilometres to Prince William Way neighbourhood before heading toward Lake Simcoe and hitting Sandycove Acres, a retirement community in Innisfil. The twister then dissipated across Lake Simcoe.