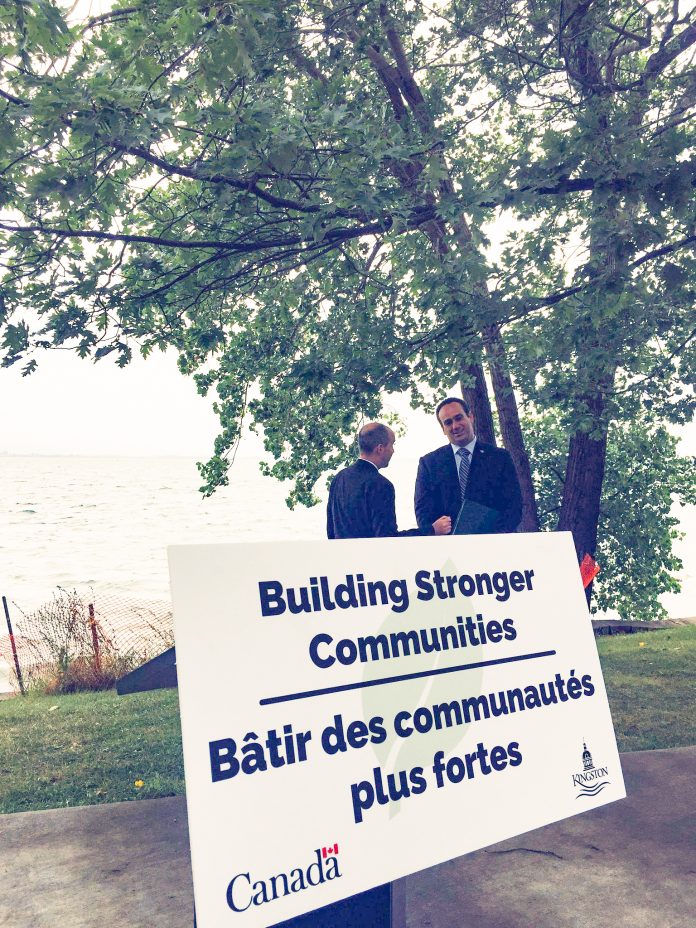 Kingston is expecting $20 million from the federal government to restore shoreline damage caused by high lake levels and upgrade the sewer systems.

Council recently signed the required Contribution Agreements with the federal government for funding from a Disaster Mitigation Fund created in May 2018 for large-scale public infrastructure projects to reduce potential economic, environmental and social impacts of climate change.

Kingston will use the money to separate storm water and sanitary sewer lines and repair and strengthen shoreline damaged by high lake water levels.

Local MP Mark Gerretsen announced funding in August, on the shore of Lake Ontario where water levels have caused damage.

“Climate change is having a dramatic impact on our Canadian communities,” Gerretsen said. “Floods, wildfires and winter storms are getting worse and, quite frankly, more frequent. The effect of these extreme weather events doesn’t go away overnight. It takes time to rebuild and repair the damage and the major toll they take.”

The funding comes from a $2.2-billion increase in the amount of money municipalities are to receive from the federal gas tax.

In recent years, local landmarks including the waterfront trail and a baseball diamond behind the Province Care Hospital had to be closed due to high water levels, resulting in valuable community amenities being closed, Gerretsen said.

“Significant rain events continue to close roads and affect city services as flooding occurs,” adding that the risk of flooding is becoming a growing concern across Ontario communities each spring and they must work to limit the damage done by future floods.

For the past two decades, Utilities Kingston has been separating storm water sewers and sanitary sewers to reduce the risk of flooding after severe rainfalls or rapid snow melt. This funding is expected to pay for more than 1.4 kilometres of sewer line separation.

According to a city staff report, almost $10 million of the federal dollars will go to repairing and re-enforcing the shoreline at 18 different locations in Kingston. One project is the pathway between Lake Ontario Park and Portsmouth Harbour. Parts of it washed away due to flooding caused by the record high water levels in Lake Ontario.

Another $10 million will be used to continue work on separating the sewer and storm drains in Kingston’s historic downtown.

Federal funding covers about 40 per cent of the estimated $50 million restoration price tag and 60 per cent is included in the city’s long-term capital plan.

The city says it could take a decade to complete all the work.