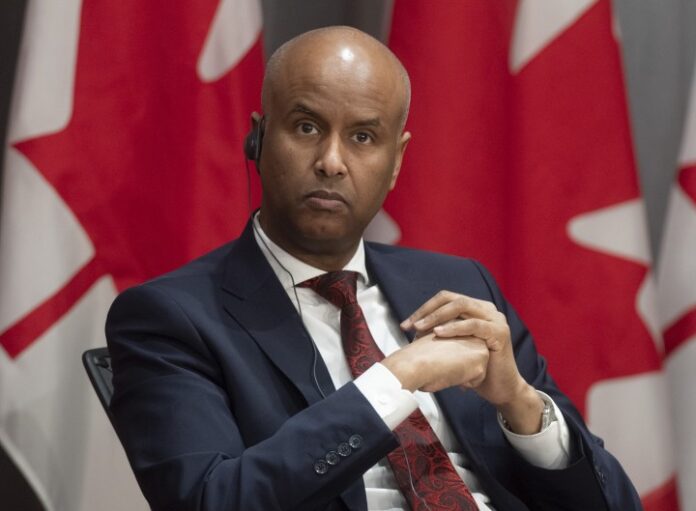 By THE CANADIAN PRESS

The federal government plans to spend $1 billion over the next six months so cities and housing providers can buy properties being sold because of the COVID-19 pandemic and use them to keep people from becoming homeless.

The details of the program unveiled Monday fill what was seen as a gap in the Liberals’ decade-long national housing strategy.

It is estimated that the program will create 3,000 new affordable housing units across Canada, and funds must be spent by the end of March 2021, the end of the federal fiscal year.

Municipalities, provinces, territories, Indigenous governing bodies and agencies as well as non-profit organizations can tap into the money that for now appears to be a one-time program.

Social Development Minister Ahmed Hussen said the program will only take applications for projects to quickly build or buy units that would also serve vulnerable populations like women fleeing domestic violence, or people at immediate risk of becoming homeless.

“All the costs associated with the services provided to people on the street, the criminal justice costs, the health costs, policing — all of that is way more than the cost of that project. So we have to be smart as a country to always look for more innovative solutions to house people rapidly.”

Some cities like Toronto and Edmonton have already rented hotel rooms to accommodate people while shelter capacity is reduced to allow for physical spacing, but they’re badly stretched financially.

On top of the money for purchases, Ottawa plans to provide an additional $237 million for the federal homelessness strategy that could be used to find additional emergency shelter space.

Tim Richter, president of the Canadian Alliance to End Homelessness, said the increased risk homeless people face in contracting COVID-19 could become worse with a second wave of the pandemic.

The two funding announcements give communities resources to move quickly to purchase buildings they’ve been using, like hotels, or possibly convert shelters into permanent housing, he said.

Federation of Canadian Municipalities president Bill Karsten said in a statement that the overall funding is a good foundation, calling for “rapidly scaling up” from what he called important first steps.

“From Toronto to Edmonton to Calgary to Victoria, we have people living in tent encampments trying to maintain physical distance,” the Halifax councillor said.

“With winter, flu season, and a possible second wave of COVID-19 all bearing down, going slow is simply not an option.”

What’s needed as a next step is a retooling of existing programs to refocus the national housing strategy towards the short-term strains caused by the pandemic, said Leilani Farha, global director of The Shift, a housing-rights group.

She joined a group of municipal leaders, who call themselves the Right to Home Municipal Working Group, that asked governments on Monday to better protect renters in arrears and facing eviction, and small landlords who have a borne much of the economic impact from the pandemic.

“We’re seeing some really interesting movement from government, but I’m fearful that … they’re not grappling with the whole (picture),” Farha said.