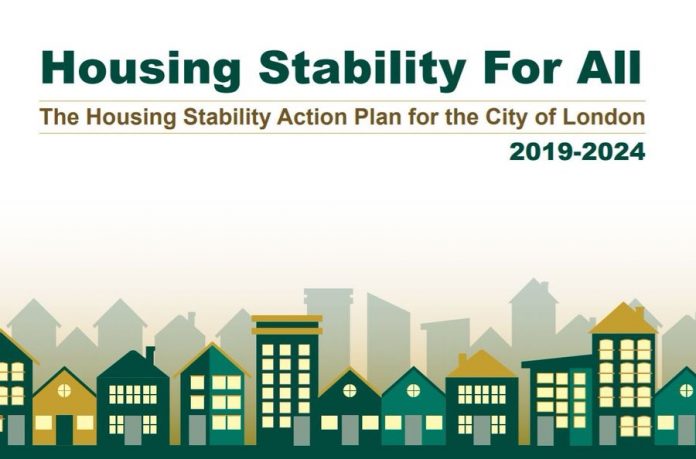 Turning surplus land, including former school properties, into affordable housing is one of the action items in the City of London’s new housing stability plan.

The document, released to the public last week, is a housing stability plan – strategies formerly labeled as a homelessness prevention and housing plan. The 67-page document lists more than 60 goals, including:

Once the updated plan receives council approval it will be presented to the Ministry of Municipal Affairs and Housing for provincial review, and then the city will lead implementation.

According to a report from Sandra Datars Bere, managing director London’s housing and social services, beginning in 2020, the city will distribute the Housing Stability Plan to the broader community, meet with community partners to identify community leads to support

implementation, form implementation groups and develop a plan to support the identified objectives and outcomes.

“In order to ensure the successful implementation of this plan, community partnership is

critical,” she wrote. “City administration will continue to work in collaboration with our community to not only achieve the desired outcomes, but also support efforts to build a community that fosters change to build a better London for all.”

Updating the city’s Homeless Prevention and Housing Plan offers “a unique opportunity for housing sector organizations, community stakeholders, and the public to work together to revise actions (as needed) to respond to local homeless prevention and housing needs.”

The plan focuses on a range of strategic actions that will guide work and resource allocation of the homeless prevention and housing services of the city from 2019 to 2024.

Between 2011 and 2016, London’s population increased by 4.8 per cent, to 384,000 – much of the growth was a result of people moving from other communities within Ontario, resulting in lower vacancies and higher housing costs. The fastest growing segment of the population between 2011 and 2016 was aged 65 and older, up by 19 per cent.

The average rental market vacancy rate in London is 2.1 per cent – 1 per cent for units at or below the average market rent and the vacancy rate of available social housing stock is between 0% and 1%.

Goals include creating a minimum of 3,000 – 300 per year – new affordable units, a 2.1 per cent rental vacancy rate. Action items in the report include: