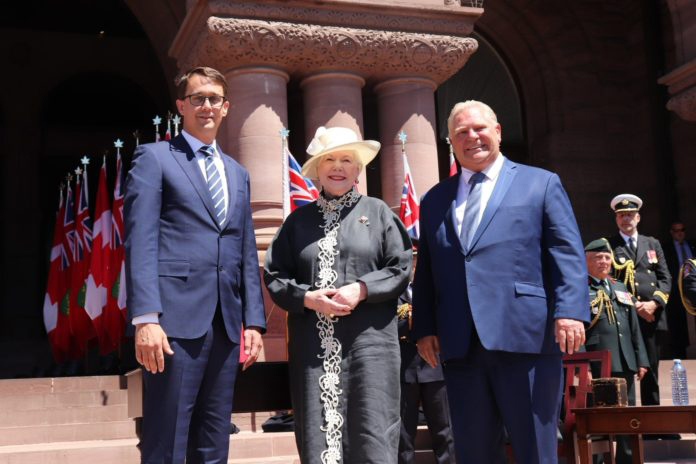 Ontario’s minister of labour, immigration, training and skills development says he is committed to “rebuilding” Ontario and that should be good news for the construction industry.

Premier Doug Ford unveiled his new cabinet on Friday, including Lambton-Kent-Middlesex MPP Monte McNaughton who was reappointed to the role he has held for two years.

“Under Premier (Doug) Ford, we will continue working for workers and rebuilding a stronger province,” McNaughton posted on social media.

MPP Steve Clark is also returning to his former role as minister of municipal affairs and housing.

Provincial officials say the group of Ministers is “an experienced team” that will deliver on the government’s ambitious agenda to build highways, transit and other key infrastructure including the road to the Ring of Fire.

Former Timmins Mayor George Pirie, who defeated 32-year veteran NDP Gilles Bisson to take the riding for the PCs, has been named Ontario’s mining minister with a special mandate to develop the Ring of Fire.

“With big challenges ahead, including an uncertain global economic climate, now is the time for unity and working together,” said Ford stated, in a media release.

“Our government will be relentless in delivering on our ambitious plan to grow our economy and build infrastructure as we leave no stone unturned when it comes to solving the historic labour shortage. It’s all hands on deck.”

McNaughton has been credited with building support for the Ford government through his support for skilled trades and support or construction projects. Eight construction unions including LiUNA and the Residential Construction Council of Ontario (RESCON), publicly endorsed Ford during the election campaign.

“We are looking forward to working again with Steve Clark his role as Minister of Municipal Affairs and Housing. With Ontario’s population surpassing 15 million, it is important that industry and government work together to achieve the goal of building 1.5 million new homes over the next 10 years. Implementing recommendations of the Housing Affordability Task Force will help achieve that target,” RESCON Richard Lyall said in a statement.

“We are eager to engage with the Minister on a path to implementation of all 55 recommendations. “Equally, we are also pleased to see that Monte McNaughton will stay in his role as Minister of Labour, Immigration, Training and Skills Development. He has been a champion for getting more people into the trades, including young people and underrepresented groups.

“We are looking forward to engaging with him to ensure that we have a sustainable supply of skilled labour to build much-needed new homes. This will require both domestic recruitment and retention, as well as reforming the Ontario Immigration Nominee Program to allow more immigrants to come to Ontario to work.”