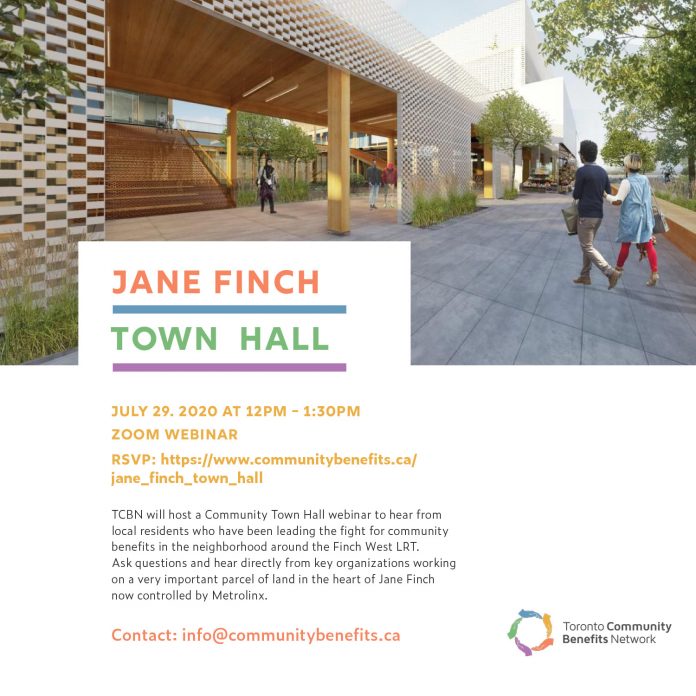 Ontario politicians are calling on the provincial government to intervene in a dispute between a major regional public transit provider and the City of Toronto after allegations the agency backtracked on a long-standing agreement to have a community centre built on its land.

Toronto Mayor John Tory, as well as opposition members of the provincial legislature, all released statements Thursday asking Premier Doug Ford’s government to hold Metrolinx accountable over its commitment to provide a portion of land from a $1.2 billion LRT station to build the centre. A local city councillor has alleged the agency, which operates the GO Transit network serving a swath of southern Ontario, had changed its mind about donating land for the centre and instead planned to sell the parcel to the highest bidder.

The Toronto Community Benefits Network (TBCN) is hosting a Community Town Hall webinar today at noon to hear from local residents who have been leading the fight for community benefits in Jane Finch. To register, visit this link.

Metrolinx denied it was reneging on the deal and said it still intended to ensure the centre takes shape in Toronto’s Jane and Finch neighbourhood, home to many of the city’s racialized residents.

“Council made it clear to Metrolinx in 2018 that this land should be designated for a combined community hub. I stand firmly behind that objective,” Tory said in a statement. “… We will make sure we hold Metrolinx to that commitment.”

According to a feasibility report produced by local organizations, the centre is set to provide a wide array of opportunities for members of the community across all age groups. The plan includes amenities such as athletic facilities, mental health programs, recording studios, computer labs, a community garden and kitchen, as well as a theatre and art gallery.

Tory said he had spoken with Metrolinx officials, who assured him the community centre would be built regardless of who was purchasing the land.

Metrolinx spokeswoman Anne Marie Aikins added that the decision to sell the land was not up to the agency, but rather was due to a provincial directive that compels public corporations to sell their land to developers so that public projects can be financed.

When asked about the confusion between the city and Metrolinx, Aikins said informal conversations that took place during the early negotiations for the community centre might have incorrectly suggested to the other side that the land would be donated.

But Aikins said she understands the concerns over the planned construction of the community centre, emphasizing that Metrolinx is “committed to making it happen.”

“This is a project that means a lot to this community, especially now,” Aikins said, noting that Metrolinx is making it clear to interested developers that a successful buyer must honour the agreement to build the community centre.

“We can put conditions in place, and one of them is going to be that this [centre] is built.”

Provincial Green Party Leader Mike Schreiner expressed skepticism about the community centre’s fate, calling the project an initiative local residents were counting on to improve their quality of life.

“At a time when we should be doing everything possible to support racialized communities, this move does the opposite,” he said in a statement. “Provincial agencies take their cues from above, and Doug Ford needs to step in and work with Metrolinx to correct this mistake.”

Toronto municipal Coun. Anthony Perruzza, who represents the ward where the community centre would be built and first sounded the alarm about the simmering dispute, said he was not reassured by Metrolinx’s most recent pledges.

He said it would be unwise of the province to allow the community centre to be mishandled, especially after the neighbourhood has been hard hit from the COVID-19 pandemic, and urged Ford to ensure the project went through.

“A project like this falls right into the [recovery] strategy…in terms of providing rehabilitation, providing a centre where kids can access for their future benefit,” Perruzza said. “… Why they would create a hiccup in this plan now, after everything, is beyond me.”

A statement from Ford’s office reaffirmed Metrolinx’s commitment to ensuring the centre is built, noting the Ministry of Transportation never directed the agency to retract its support for the project.

“We expect Metrolinx to bring forward options that align with standard procedure and ensure value for tax dollars,” the statement said.