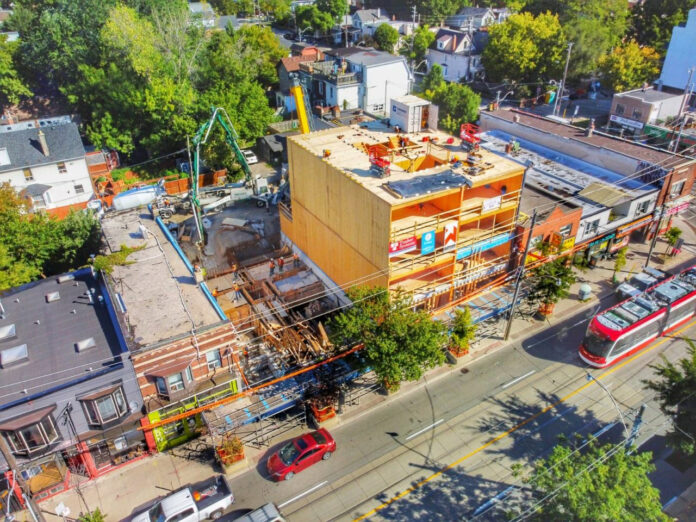 Here’s a bird’s eye view of the work on a midrise Cross laminated Timber (CLT) project  under construction at Queen and Coxwell in Toronto’s east end.

Buttcon and R-Hauz are busy transforming mainstrets with mass timber, writes Mike Yorke, president of Carpenters’ District Council of Ontario (CDCO) as he submitted this drone image taken by Lieth Moore from 200 feet in the air.

“Note as well, concrete and pumper trucks placing concrete foundations next door for phase two!  So, more to come.”

“As Mayor, creating new, quality, affordable housing is a top priority for me,” Toronto Mayor John Tory said then in a media release. “This new partnership with Context Development represents a significant investment in new affordable housing that will transform the Queen East neighbourhood.”

The $300 million project will create hundreds of new homes and revitalize the neighbourhood, he said.

TCHS’s aging Don Summerville complex will be revitalised with 120 rent-geared-to-income units operated by TCHC, 100 affordable rental units, half of which will be privately owned, 180 market-rate rental units, 350 condominium units and 16,000 sq. ft. of commercial retail space. 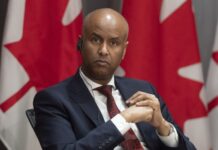