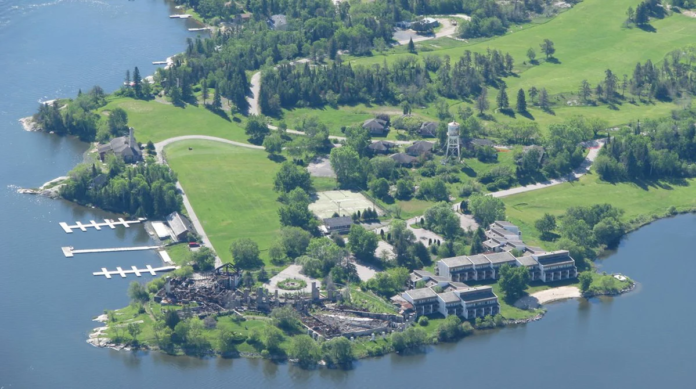 The  Minaki Lodge property in northwestern Ontario is preparing for a major redevelopment.

The lodge building burned down in 2003 and has remained unoccupied for the past 17 years.

However, things will soon change.

“We are excited to have all government approvals and to be able to proceed with the redevelopment of the property – it’s taken several years, but we are confident that this project will provide quality, affordable access to recreation opportunities for residents of Manitoba and Northwestern Ontario,”  David Banman, spokesman for Minaki on the River Inc., said in a release on Sept. 29.

An earlier development plan, approved by the provincial government in 2016, called for converting 120 hotel units into 56 condominiums, and see 82 additional cottage lots developed.

It isn’t clear why that development didn’t go forward.

CBC News reported that the old lodge was basically in ruins but the new owners pulled out almost 1,700 tons worth of steel and transported it to Selkirk, Manitoba to be recycled.

Minaki on the River has two other development options available, neither of which require government approval, DataBid.com reported.

There are already 119 existing cottage lots on the site, which could be sold individually and the other option would be a seasonal camping or mobile home park with a maximum of 250 units.

The company hopes to begin development on the site next spring.

The lodge was originally constructed in 1914 and located on the route of the National Transcontinental Railway at Minaki, where the railway crosses the Winnipeg River. The rustic resort hotel named Minaki Lodge and the railway station, also called Minaki, is an Ojibwa word meaning “beautiful water”.

The Grand Trunk Pacific Railway and the National Transcontinental Railway went bankrupt and were nationalized as part of the Canadian National Railways, DataBid reported, citing Wikipedia.

Sir Henry Thornton rebuilt the hotel on a more lavish scale but it burned down as it was about to open in 1925. He rebuilt it on an even more lavish scale using Scottish stonemasons, Swedish lot cutters and English gardeners to build and landscape a soaring granite and log building that opened in 1927. He also had a golf course built.

Minaki Lodge remained a luxurious resort until after the Second World War but travel patterns changed and the railway, emphasizing freight, sold it in the early 1950s. Over the next 50 years, the hotel passed through many hands and many renovations.

The Ontario government owned it for some years and spent about $50 million on upgrading it, only to sell it to a hotel chain for $4 million. Owners since then have included a nearby Indian band, a Texan speculator and a Calgary real estate developer. The main building burned to the ground in October 2003 and the resort has not operated since.