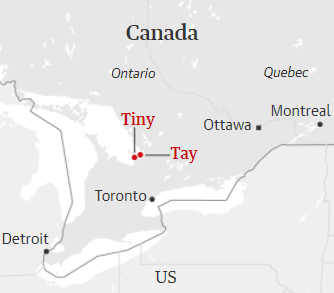 A petition sponsored by current and past Members of Parliament, is calling for federal action to protect local groundwater said to be the purest water known to science. As of Sunday afternoon there were 965 signatures.

Simcoe North MP Adam Chambers and former MP Bruce Stanton wants the Canada Water Act and any other relevant legislation to be used to protect the pristine waters of the Simcoe Uplands — also known as French’s Hill — so that research may proceed into how this purity is created and maintained.

“We, the undersigned, residents of Canada, call upon the Government of Canada to work under, but not limit itself to, the Canada Water Act to protect the pristine waters of the Simcoe Uplands in Ontario so that research may proceed, and these waters be preserved forever,” Chambers wrote in his House of Commons petition.

A Tiny Township gravel pit located in the Simcoe Uplands is licensed to take 600,000 tonnes of aggregate annually and 6.6 million litres of water daily for 210 days and wants to expand

Also, two adjacent pits have licences to take gravel and have applied for 10-year permits to take 1.6 million litres of water daily for washing gravel for 180 days yearly

Chambers argues that federal protection is needed for the following reasons: