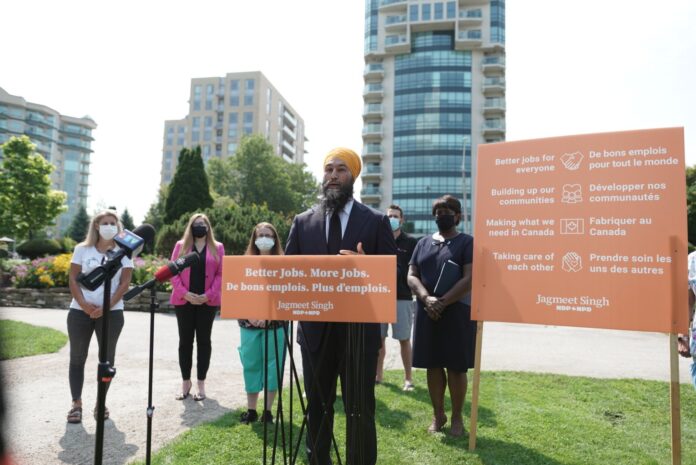 Federal NDP Leader Jagmeet Singh is promising infrastructure projects funded by a New Democratic government would use Canadian steel and other domestic goods to help get people working.

“Any time we talk about big infrastructure, there has to be a commitment that the infrastructure is made with Canadian products, Canadian steel, Canadian aluminum,” the NDP leader said July 14 at a campaign-style stop in Windsor.

Singh stopped short of calling his proposal a “Buy Canadian” policy along the lines of the “Buy American” rules for government in the United States. President Joe Biden has committed to strengthening the policy and doubled down on that when he announced his $2-trillion infrastructure program earlier this year.

The infrastructure spending promise is one part of an NDP plan to create one million jobs _ a goal the Liberals and Conservatives have also pledged to reach.

The NDP’s jobs blueprint focuses heavily on past promises, including better supports for workers through a national pharmacare program, 10 days of paid sick leave and higher minimum wages.

Besides building public infrastructure, including transit, Singh says an NDP government would create economic activity through building 500,000 new homes _ a promise he made in the 2019 election campaign _ and bolstering the country’s domestic manufacturing capacity.

“The NDP announcement might sound good, but there was no detail and plan to back it up,” a Liberal government spokesperson wrote in a statement.

June left the country about 340,000 jobs, or almost two per cent, below pre-pandemic employment levels seen in February 2020.

When factoring in population growth, Statistics Canada said the employment gap is likely closer to 540,000 jobs.

The Bank of Canada also said Wednesday it estimated about 550,000 people would need to be hired.

When it comes to Canada’s deficit, Singh said Wednesday people are worried, partially because past Liberal and Conservative governments have dealt with it through higher taxes or program cuts.

Singh says the NDP is proposing a third option: asking the “ultra rich to pay their fair share.”

“One of our plans is to make sure we have a wealth tax, that we have a pandemic profiteering tax,” he said at Wednesday’s announcement.

He added he would target web giants such as Google, Netflix and Amazon.

In its April budget, the federal Liberal government projected the deficit to be $154.7 billion this fiscal year, after a record-smashing $354.7 billion last year, driven by the COVID-19 pandemic.

Conservative Leader Erin O’Toole has said he would balance the budget over the next decade and better control government spending.

On Thursday, the parliamentary budget officer is set to release an estimate of how much revenue the federal government could raise through a one-time tax on assets worth more than $10 million. Liberal MP Nathaniel Erskine-Smith brought the idea forward to the House of Commons in February as a way to address wealth inequality.