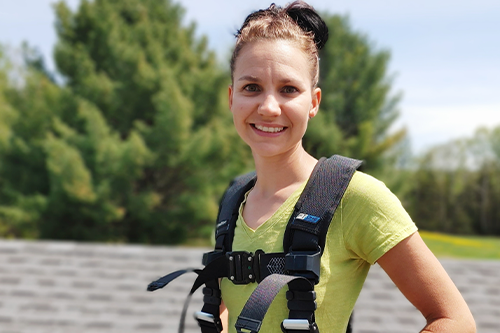 A North Bay roofer has been recognized as one of the top five women roofers in North America. The winner will be chosen by the public, and voting is open through June 6 and the winner will be announced June 18.

Mulder runs Nailed it Roofing and was nominated for the Female Roofing Professional of the Year by customers and her business partner husband. 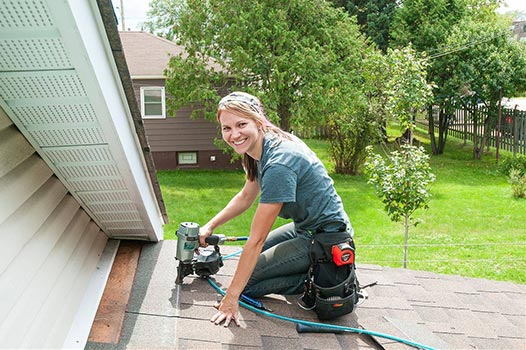 The online competition is sponsored by Beacon Building Products, one of the largest distributors of commercial and residential roofing products in North America. Mulder was chosen as a finalist out of 680 applicants – the only Canadian to make the cut.

“I am extremely honoured and surprised to be the only Canadian in the top five finalists,” Mulder said. “It was great to be recognized for my work and story. I feel through this I can continue to reach out and support females who are interested in the trades.”

As a guest speaker and mentor for the North Bay Young Women’s Career Exploration event held by Skills Ontario and Canadore college, the mother of three has worked to inspire young women in her local community.

The event’s focus was on empowerment and promoting great career opportunities.

“I would love to host more events like this. I was thinking about starting up small weekend workshops ‘try a trade’ where I could set up little projects for anyone to come out and gain hands-on experiences,” she said, of a future goal.

“There are many different career choices that we just don’t know are out there. I would like to highlight and bring attention to the success of a blue-collar way of life”.

Mulder graduated from Canadore College in the Construction Carpentry, Renovation Techniques program in 2005 and started working in North Bay with Amy-Co Contracting.

After living in Milton where she worked for Mattamy homes and met her husband Sam, they moved back to North Bay and started their own business. 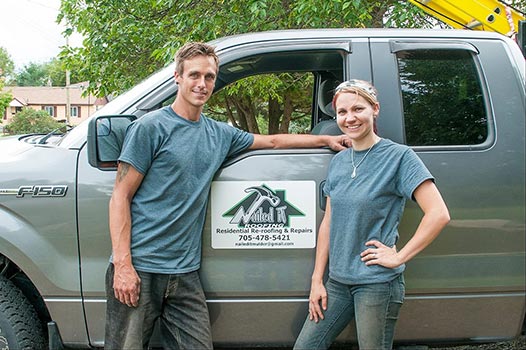 “As a hands-on owner, she is present on the roof all day, removing and replacing shingles,” Sam wrote in his nomination.  “She is a proud mentor for young women at her local college. She speaks at events for women in trades hosted by Skills Ontario and encourages these young females to pursue a career in the trades. She is passionate that women belong and should be represented in all levels of construction.”

Michelle is a member of the Construction Program Advisory Committee (PAC) at Canadore College and participates in community events to “give back”.

“I would love to be that role model for anyone just even thinking about it, to just give them that push and to show them that it can be done,” she said. “You can do it and it is definitely a rewarding career.”