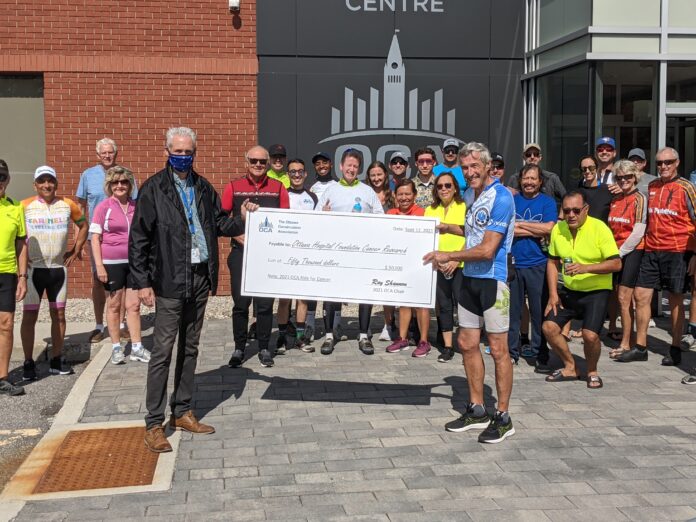 A group of about 35 Ottawa Construction Association (OCA) cyclists raised $50,000 for the Ottawa Hospital Foundation through a 47-km ride around the city last Sunday (Sept. 12).

The event, organized by John DeVries, the association’s president and general manager, commemorated an annual cycling event that ended in 2019 after a 10-year run.

“The construction industry annually represented the largest number of corporate teams and riders in the event raising a disproportionate share of the overall $14 million raised for the Ottawa Hospital Foundation in those 10 years,” DeVries said before the commemorative event.

DeVries said a personal initiative from OCA member Mike Bull of Enterprise Commercial Truck inspired him to develop the event.

“For 10 years from 2010 to 2019 OCA members passionately participated in the annual Ride the Rideau (later changed to The Ride) fundraiser for the Ottawa Hospital Foundation and specifically for cancer research,” he wrote.

“The construction industry annually represented the largest number of corporate teams and riders in the event raising a disproportionate share of the overall $14 million raised for the Ottawa Hospital Foundation in those 10 years.”

“Recently I was inspired by the family story of Mike Bull of OCA memberEnterprise Commercial Truck who annually led the Enterprise Team on The Ride. That story triggered the creation of this OCA ride to build on the fundraising by Mike but also to challenge other member firms to join in as well.

“Mike did not let the 2019 cancellation of THE RIDE deter him from giving back to the Hospital. In 2020 he raised several thousand dollars for cancer research by riding not one single ride but a whole season’s worth for a total of 2,262 km,” DeVries wrote.

Bull decided to raise the bar for 2021 by committing to riding and rowing 7,821 km – the length of the Trans Canada Highway.

In a brief presentation after the OCA ride, Bull said he and a core group of people wanted to bring The Ride back last year. “We had a couple of focus group meetings and everyone seemed, you know pumped up about continuing The Ride.” Then COVID-19 hit, derailing the resurrection plans.

The OCA event, while much smaller in scale (and shorter compared to the 117 km in the original Ride) still provided cyclists with plenty of enthusiasm and exercise. The association provided refreshments and participants after the riders returned to its offices on Antares Ave.