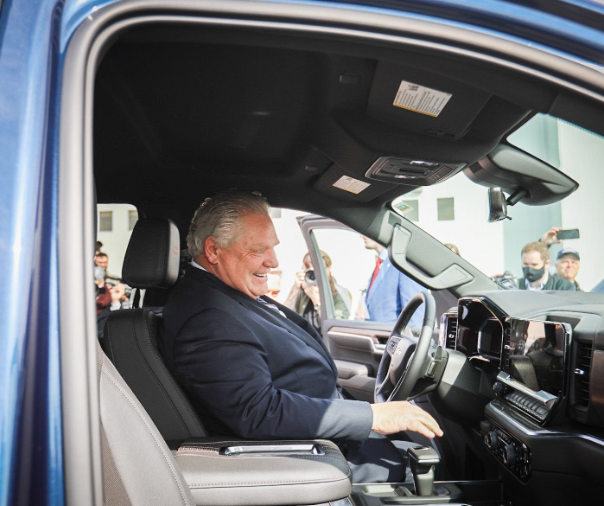 The provincial and federal governments have announced matching $259 million grants to help General Motors Canada transform the Oshawa and CAMI manufacturing plants, paving the way for GM’s first electric vehicle (EV) production line in Ontario in Ingersoll and the continuation of vehicle production in Oshawa.

GM says it will spend more than $2 billion on the upgrades.

“This vote of confidence by General Motors in Ontario is more proof that by attracting game-changing investments our government is securing our auto sector for the next generation of workers,” said Premier Doug Ford. “It shows once again that the cars of the future will be made right here in Ontario, by Ontario workers.”

“Through this game-changing investment, GM has deepened their commitment to Ontario and its workers, and advanced Ontario’s drive to become one of the most vertically integrated automotive jurisdictions in North America. It will secure thousands of well-paying, high-quality jobs and manufacturing operations in Oshawa and Ingersoll for years to come while also bolstering the province’s presence in the EV space.”

“This partnership with the governments of Ontario and Canada is helping GM build a more diverse, innovative and sustainable industry and EV supply chain for the future – and we are proud to be doing that right here in Canada,” said Marissa West, GM Canada president and managing director.

Over the last several months, Ontario has announced more than $10 billion in investments by Ford, ArcelorMittal Dofasco, Honda, and a joint venture between LG Energy Solution and automaker Stellantis to build the province’s first large-scale electric vehicle battery manufacturing plant in Windsor.