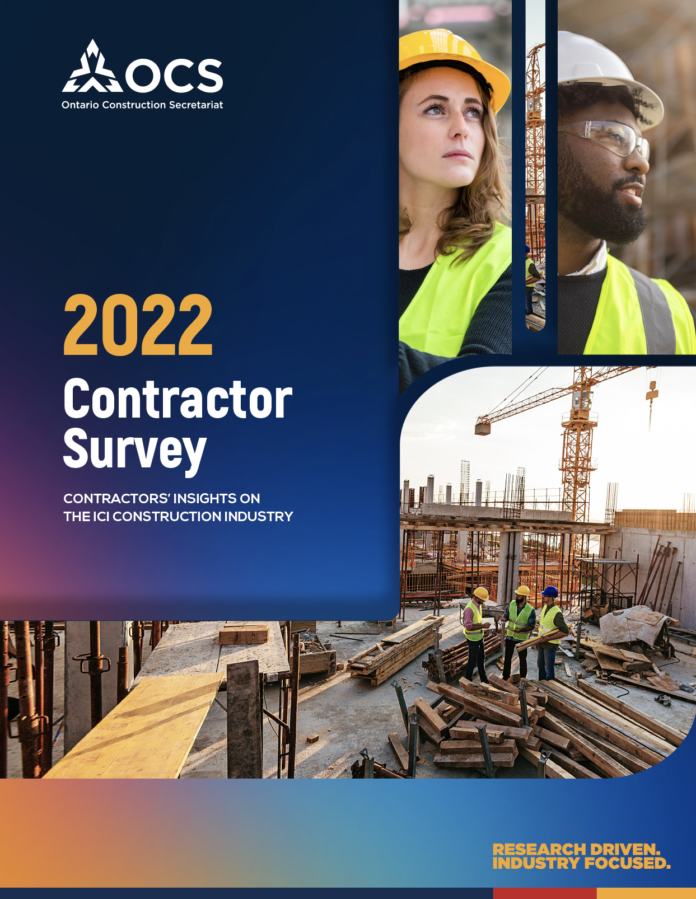 After two years of life in a pandemic with restricted economic activity, Ontario construction contractors are feeling confident about their business prospects in 2022, according to the annual Contractor Survey conducted by the Ontario Construction Secretariat (OSC).

Overall, 82 per cent of the 500 general and trade industrial, commercial and institutional (ICI) contractors surveyed have a positive outlook on Ontario’s construction industry, with more than a third feeling they will do more business this year compared to last and 48 per cent forecasting their business to at least stay the same. Only 11 per cent expect their business to drop in 2022.

“As with most sectors of the economy, it has been a difficult time in construction over the past two years,” says OCS CEO Robert Bronk. “But we are starting to feel more confident that we are emerging from the pandemic, and we are seeing that reflected in the attitudes of Ontario ICI construction businesses.”

Confidence was highest in central Ontario (39 per cent) and eastern Ontario (38 per cent) while contractors in the GTA were right on the average with 36 per cent feeling good about their business prospects. The outlook was more cautious in the north, where only 30 per cent felt business would improve this year.

The survey also found that, on average, contractors are expecting the number of people they employ to grow by eight percent in 2022, with 94 per cent reporting they are expecting to hire more workers (43 per cent) or stay at the same level (53 per cent) as 2022.

However, despite the positive outlook on the coming year, labour and materials are major concerns for contractors. On a seven-point scale — where seven represents a major concern and one no concern at all — 45 per cent of contractors rated the availability of labour as a seven, and 44 per cent gave material costs the highest rating. Also of significant concern is the quality of skilled trades labour (38 per cent) and availability of materials (34 per cent).

While COVID is less of a concern looking ahead, the pandemic continues to have an impact on the industry. More than half of contractors (52 per cent) have had projects postponed in the past year or later this year — however two-thirds of those have already been re-scheduled. A further 38 per cent of contractors have had projects outright cancelled, and more than three-quarters (77 per cent) have experienced significant supply chain disruptions in the past year.