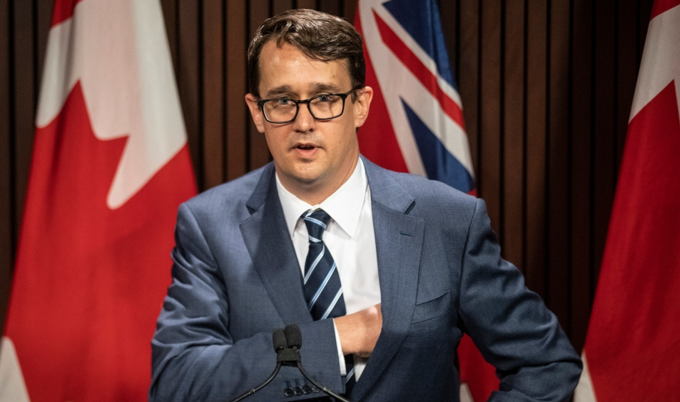 Ontario is calling on the federal government to double the number of immigrants allowed into the province under a program aimed at boosting the skilled workforce.

Labour Minister Monte McNaughton says the labour shortage that has been intensified by the impact of the COVID-19 pandemic and doubling the number of immigrants allowed under the Ontario Immigrant Nominee Program from 9,000 to 18,000 a year will help tackle that shortage.

The number of job vacancies in Ontario has increased from 234,000 in October of last year to almost 316,000 vacant jobs last month, according to Statistics Canada.

While all industries are dealing with a labour crunch, 21,000 in construction were unfilled in the second quarter of this year.

McNaughton says he reached out recently to the newly-appointed federal Immigration Minister, Sean Fraser, to call on him to increase the number of skilled workers allowed into Ontario under the program.

“We’re asking the new minister and the federal government to double it and do it as quickly as possible,” McNaughton said. “Immigration is one of the key economic drivers of Ontario’s growth, one that can be used strategically to fill critical gaps in labour supply and ultimately create more jobs in our communities.”

A spokesman for the federal immigration minister said Ontario receives the largest number of economic immigrants among all provinces and territories.

“We are currently reviewing Ontario’s request to increase the number of newcomers under the (program) as we finalize next year’s immigration levels plan,” Alexander Cohen said.

The Ontario Immigrant Nominee Program allows foreign skilled workers and international students to apply to the Ontario government to be nominated for permanent residency in the province, but the federal government makes the final decision on approving the applications.

The province nominates people who have the skills and experience needed in Ontario.

McNaughton said the program had the capacity for 6,750 immigrants when the Progressive Conservatives came to the power in 2018. He said he’s worked with the federal government to increase that to about 9,000 immigrants this year.

Ontario wants more control over the number of immigrants allowed under the program, as well as process of selecting them, McNaughton said. Currently, health-care workers and those working in skilled trades are most needed in Ontario, he said.

“There’s tens of thousands of more new Canadians coming here through the federal government, and we want to have more control over that selection process,” he said.

“We want an efficient, effective system that’s going to do a more effective job of filling these labor shortages.”