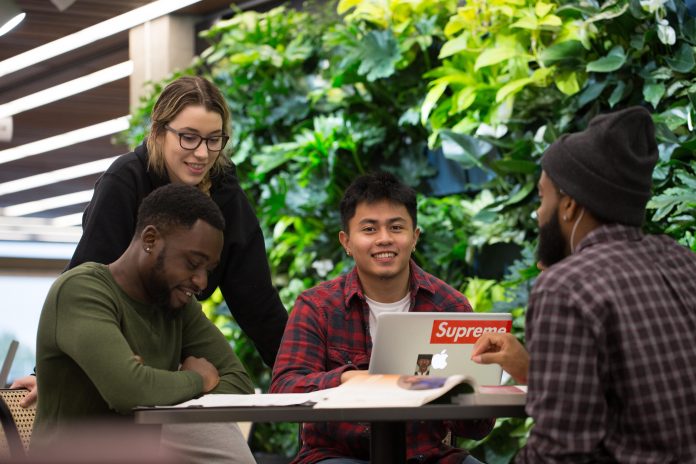 When Peterborough-based Trent University sought inspiration to transform the iconic Bata Library at its campus in 2015, they looked to Mother Nature to provide answers.

Schools in Ontario – like Trent University – are actively engaged in enhancing sustainability infrastructure. A survey conducted by Ontario’s Universities found that, 17 out of 21 universities in the province have added new green initiatives on sustainability since 2013. Their work included research on eco-friendly construction, low-carbon households, sustainable agriculture, new biofuels and other clean energy sources, electric vehicles and transit, the organization outlined.

Universities and other corporations are using the concept of biophilia while planning for future construction. The Biophilia hypothesis suggests that human beings possess an innate tendency to seek connections with nature and other forms of life.

Jordan Richie, from Ginkgo Sustainability, a company that installs and maintains green infrastructure, said that North America is in the forefront in green-building infrastructure.

“We see more and more green roofs and walls being installed in North America. Toronto is a leader, Washington is a leader,” he said. “People look for bringing in more living installations, as there’s a whole biophilic aspect to it. Humans have an affinity for seeking out living systems like plants or running water systems.”

“With Green roofs, they are more functional in nature as they offer biodiversity enhancements and protect roofs from wild temperature swings and harmful UV rays, they also act as a good storm-water system. Living walls cut down sound transmission but they are mainly for aesthetics.”

For Trent University, the 278-sq. ft.  wall and multiple green roofs are part of the institution embracing a green future, while building on the vision of Thom who sought to bring humans and nature closer together through his design.

“The wall itself cost about $40,000 to install, and we have Ginkgo Sustainability for maintenance, they come in every two weeks for an inspection. To maintain the wall it costs less than $5,000 a year. We will consider it as a permanent architectural feature of the building.”

Green infrastructure in building design provides for aesthetic and psychological benefits for its residents using the space and also generates cleaner air as plants naturally filter the air.

“Whether it’s by adopting LEED-certified design in new buildings or aggressive retrofit campaigns to make older buildings energy efficient and even carbon-neutral, our universities take sustainability to heart,” Ontario’s Universities stated in its summary report.

Incorporating green installations in old or new structures though requires close coordination between multiple stakeholders, including architects, contractors, electricians, nurseries and installers as water and fertilizers need to be brought to installations regularly while eliminating risks to residents.

“We worked with a local nursery to grow the plants, this ensures that they are well rooted before we transport them to be installed. Cost of the wall depends on a lot of factors, including the size of the wall, and location, but it can vary from $125 to $250 per-square-foot,” Richie said.

Among other institutions thinking green are, Western University in Ontario which runs ‘Green Building Tours’ to provide students and the general public with an opportunity to explore what makes buildings at the campus sustainable.

The University of Ottawa’s Faculty of Social Sciences, in 2013, opened its doors to the tallest green wall in the country, standing six floors high at 78 feet. University of Gueplh-Humber, University of Waterloo, Sheridan College and Centennial College have similar installations.