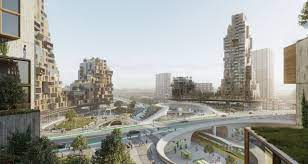 Cortel Group and Metrolinx have agreements in place to start construction of a GO station in the Town of Innisfil with a ground-breaking in 2022, launching the massive Orbit development.

An MZO was issued in August, jumpstarting the process and “giving the certainty of use that the developer wanted before they started spending significant money on the design, because that is at their cost,” town staff said on Simcoe.com.

However, opposition to the plan continues and the Williams Treaties First Nations (WTFN) group has asked for a judicial review of the minister’s zoning order (MZO) that was issued for the Orbit development in Innisfil.

WTFN has asked the Ontario Superior Court of Justice to review the MZO issued by Minister of Municipal Affairs and Housing and Steve Clark. Cortel Group Inc., a major landowner in the Orbit lands, is also named in the application for judicial review.

The Orbit is a proposed development on Innisfil’s 6th Line that will centre on a GO train station and will have a total population of about 150,000 upon completion. The GO station will be built first, beginning this year.

In the application for the judicial review, WTFN alleges Clark “unreasonably and unlawfully ignored his constitutional obligations to consult and accommodate WTFN.”

When the Crown has knowledge of potential existence of an Aboriginal or treaty right and is considering an action that may adversely affect it, it triggers a duty to consult and include First Nations in any decision-making processes under section 35 of the Constitution Act, 1982.

The Orbit is a proposed development on Innisfil’s 6th Line that will centre on a GO train station and will have a total population of about 150,000 upon completion.

Rescue Lake Simcoe Coalition executive director Claire Malcolmson is also opposed to the use of a Minister’s Zoning Order issued by the province to advance the project, and the impact it will have on Lake Simcoe.

Malcolmson published a blog post on the Rescue Lake Simcoe Coalition website titled ‘Orbit or Obit for Innisfil’, outlining her concerns about the project.

“If you believe the pictures, it’s an idealized round garden-city style community in which everyone has a cool job, with tasty micro-brew available downstairs, and where plants grow lushly off buildings,” she said.

“Here’s what I think it actually is: a brilliantly executed land grab, led by well-connected developers, whereby they get to build a new town, and put themselves in prime position to add lands to Innisfil’s already oversized employment area and also get a new interchange at Hwy 400 and Innisfil 6th line – all in exchange for building a GO station at some unspecified time.”

The Rescue Lake Simcoe Coalition labelled the Orbit as greenwashed sprawl in a March 2021 report, “Lake Simcoe Under Pressure”, warning it opens agricultural land for new and expensive development.

An MZO was issued on August 6, 2021 to speed up the planning process.

“The use of an MZO for a project of this scale offends planners and urban sustainability experts,” Malcolmson said. “It also offends residents who made comments about it to the Town of Innisfil.

“It seems the town and the minister care little about what citizens think.”