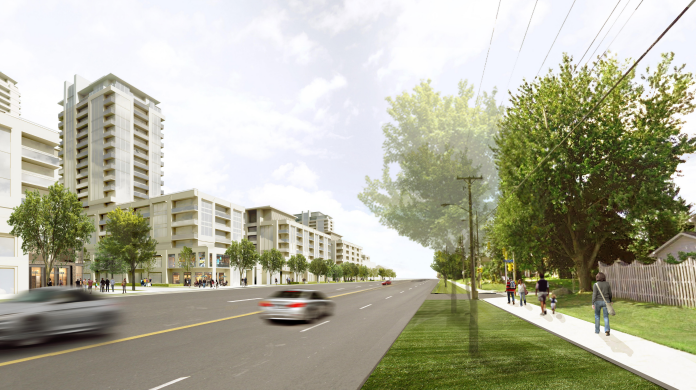 Ottawa City Council has approved an ambitious multi-decade redevelopment project in Ottawa’s south end. The developer has committed that, before demolitions occur, existing tenants would be able to remain in their units or move within the project without rental increases.

The exact value of the new Heron Gate development by Hazelview Investments Inc. is unclear, but the developer said in a statement that it has invested more than $175 million in the community since taking over the property in 2012.

City Council approved the development through an amendment to Ottawa’s Official Plan on Sept. 8.

“All units were planned to be rental with a potential to include a diversity of tenure types, including ownership,” a City of Ottawa statement says. Several new structures will be built on the site, including apartment buildings reaching 25 stories.

Hazelview says that it plans to “co-create a complete, vibrant, diverse and sustainable community that enhances the quality of life for residents, visitors and neighbours, while harmonizing with surrounding communities.”

“We would like to thank community members, Heron Gate residents, city staff, City Council and other stakeholders who have helped us reach this major milestone together,” Michael Williams, Hazelview Investments’ executive director of real estate development, said in a statement. “We take this approval and our commitments to the Heron gate community seriously and we will continue to work closely with stakeholders to ensure that we can keep this redevelopment moving forward.”

The developer expects to begin construction of the site’s first phase in 2022, after it works with the city and engages with “community members, residents and partners alike to finalize designs.”

Hazelview has signed a Memorandum of Understanding with the city, detailing the Heron Gate Social Framework that confirms some of the social commitments it had previously announced “including recent additional commitments for affordable housing, social enterprise, green space, diversity of housing and more,” the statement said. “Hazelview has already begun planning on how to quickly implement many of the commitments in the community.”

“The applicant has agreed on the provision of a total of 1,020 units at different levels of affordability within both the existing towers and new buildings to be constructed, for a time period of 10 to 20 years,” a city statement says.

“The existing public roads will also be retained, and would be connected to new private and/or public roads,” city planning documents say. “The proposed buildings range from two to 40 stories in height and some buildings along Walkley Road and Heron Road would contain commercial spaces at grade.”