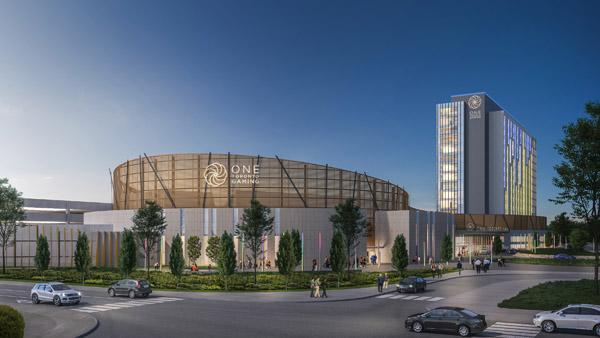 Here are some projects and initiatives in Ontario.

Construction is well underway on a massive construction project in Pickering.

The Vegas-style complex, dubbed Durham Live, will become the premier entertainment and tourism district east of Yonge St., and one of Ontario’s top destinations for fun and excitement, according to the City of Pickering.

Anchored by a resort casino and five-star hotel, the destination will also include a boutique hotel, convention center, theatre, restaurants, cinemas, an indoor water park, performance venues, an office tower, and film studios.

The landmark project, located at the northwest corner of Church and Bayly streets, will boast a dynamic mix of excitement, culture, nightlife, cuisine, and adventure that will cater to every whim and indulgence, according to the city.

It is estimated that Durham Live will create up to 10,000 jobs, and the casino alone is expected to see 1,700 new gaming and non-gaming staff at full operation.

The project will be built in phases with the first phase is expected to be completed by 2020. The second phase will begin construction sometime in 2020.

Durham Live is being developed by Triple Properties.

West Corridor Constructors has reached financial close on the Highway 401 Expansion project in the Greater Toronto Area. The total contract is valued at $639.8 million.

West Corridor Constructors, selected by Infrastructure Ontario and the Ministry of Transportation Ontario to design, build and finance the project, is a consortium comprised of Aecon Group (with a 50% stake), Parsons (30% stake) and Amico (20% stake).

The Highway 401 Expansion is an approximately 18-km reconstruction and widening project in the western part of the GTA, from the Credit River in Mississauga to Regional Road 25 in Milton, consisting of two 10-lane segments, two 12-lane core collector systems and median High Occupancy Vehicle (HOV) lanes.

Ontario investing to upgrade bridge in Mississauga; RFQ issued
The Ontario’s government will invest in the rehabilitation of the bridge on the Queen Elizabeth Way over the Credit River in Mississauga.

The project will be delivered through Infrastructure Ontario’s design, build and finance public-private partnership model, which transfers appropriate risks associated with design, construction and financing of the project to the private sector.

Construction dates and schedules will be determined through the procurement process and the successful proponent’s schedule.

IO has issued the request for qualifications which is available at www.merx.com.

“While the troubled financial situation in Ontario has put essential services that people rely on – including community safety – at risk, we are committed to protecting what matters most. Few things matter more than the security of the people,” Jones stated.

“The new facility in Thunder Bay will ultimately lead to improved public safety, as staff are protected on the job and inmates receive access to comprehensive rehabilitation and are safe while in custody,” Jones added.

Combining the Thunder Bay Jail and the Thunder Bay Correctional Centre will ensure taxpayer dollars are managed appropriately as two independent facilities will no longer be needed in the same community, according to Jones.

The new complex will include: multiple housing options to ensure inmates receive supports responsive to their needs while keeping staff, inmate and community safety a top priority; rehabilitative programming and healthcare services delivered in a manner that better supports inmate management and improves safety in the facility and community; and improved management and services of female inmates in custody.

“After decades of neglect, a changing and increasingly complex inmate profile and increasing instances of inmate on staff violence, it’s critical that we take action now to bring real change in corrections and introduce leading edge interventions that will ensure both staff and community safety,” Jones added.

On March 29, IO and the Ministry of Community Safety and Correctional Services issued a request for qualifications for interested parties to design, build, finance and maintain a new Thunder Bay Correctional Complex.

Dubbed Block 211, the class A office building will be built at the gateway to East Chaudière Island. The 200,000-sq.-ft. office building is targeted for completion as early as 2022.

Zibi is a redevelopment project by Dream Unlimited and Theia Partners. The new mixed-use community, located on both the Ottawa and Gatineau shores of the Ottawa River, will transform former industrial lands into a blend of mid-rise residential housing types, commercial and office spaces, waterfront plazas, outdoor squares, and diverse retail offerings.

Carla Qualtrough, the minister of public services and procurement and accessibility, announced a $277-million green renovation project for the Arthur Meighen Building in Toronto.

The project will transform the building into an energy efficient, low-carbon asset, cutting its annual greenhouse gas emissions by up to 80% and reducing Arthur Meighen building operating costs.

The building will also be retrofit to meet all federal accessibility standards, as well as include innovative features such as electronic beacon devices to help people with visual impairments navigate the building.

The building’s electrical, mechanical, plumbing and safety systems will all be replaced with modern, energy-efficient systems. Roof-top solar panels, a geothermal heating and cooling system, triple-glazed windows and efficient smart lighting will all contribute to the energy and cost savings.

The development will create more than 300 full-time construction and construction-type jobs.

The project is underway and is expected to be completed in 2022. Once complete, approximately 1,500 federal employees will work in the building.