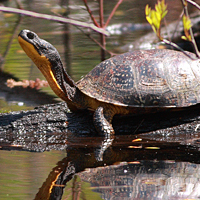 M & A Rentals, an Ottawa-based company, has been convicted for damaging a Blanding’s Turtle habitat. A court order issued Aug. 26 requires the company to:

The conviction relates to the unlawful damaging of the habitat of a threatened species, as listed under the Species at Risk in Ontario List sometime between December 2016 and May 2017

Court heard that in April 2016, during a meeting with City of Ottawa staff, the company was advised that the property contained Blanding’s Turtle habitat and that the turtle species is listed as threatened under the ESA. The city also indicated that the company would require a permit from the Ministry of Northern Development, Mines, Natural Resources and Forestry if the habitat was to be altered.

Despite the warning, portions of the property were cleared by heavy equipment retained by the company and included the cutting/removal of shrubs and other vegetation and the movement of topsoil that was pushed into piles and berms on-site.

An investigation was initiated by the Ministry of Northern Development, Mines, Natural Resources and Forestry and it revealed the company had damaged Blanding’s Turtle habitat by reducing or eliminating wet and vegetated areas utilized by the species for cover, feeding and migration purposes.

At the time the work was completed, no permit had been obtained by the company.