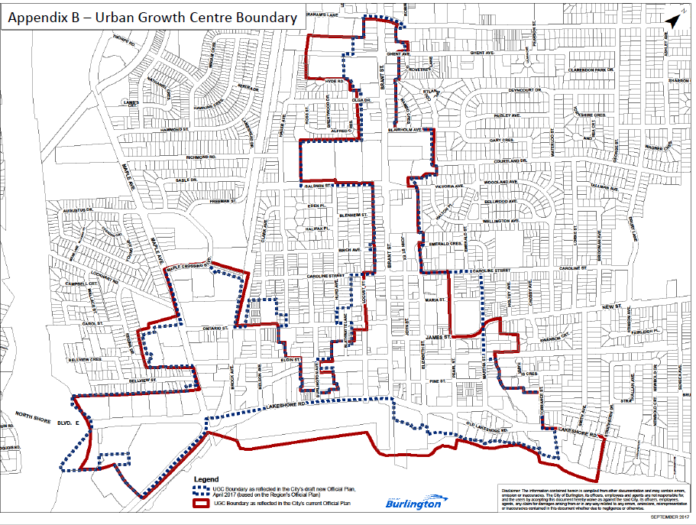 The City of Burlington’s urban growth centre (UGC) boundary change has been approved from the minister of municipal affairs, an important step in the effort to stop over-development of the historic downtown.

According to city staff, the immediate boundary adjustment along with the removal of the Major Transit Station Area (MTSA) designation apply to all new development project applications and will “help control overdevelopment moving forward.”

However, seven development applications submitted prior to Nov. 10, 2021 have been exempted from the UGC boundary adjustment and the city is seeking additional clarification on how to proceed.

As part of the process, the city was required to work with the Region of Halton to make these changes through a Regional Official Plan Amendment (ROPA). The ROPA process involved extensive work and collaboration between the City and Region and consultation with the public.

“Burlington’s Council was elected with a clear mandate to stop overdevelopment, and we will continue to do everything within our power to do so. The adjustment of the boundaries of the UGC and the MTSA are a victory for good planning in Burlington. However, implementation issues remain to be resolved,” said Mayor Marianne Meed.

“The minister’s decision that the policies apply only to new applications presents a greater challenge to achieving our vision for downtown with the applications already in and we remain undaunted in our efforts to keep advocating for the best planning outcome for our community.”

The immediate adjustment of the UGC boundary and the removal of the MTSA designation will complement provincial transit investments and contribute to the development of sustainable, transit-oriented complete communities in Burlington.

These provincial actions also send a clear signal that the scale and intensity of recent development activity in Burlington’s historic downtown was driven by misuse and reliance on the UGC and MTSA and was not sustainable given on-the-ground realities of physical and social infrastructure.

Five of seven applications located in Burlington’s downtown are before the Ontario Lands Tribunal and the city will strongly advocate that the tribunal consider the vision for downtown and changes brought in by the province.

“We will encourage proponents of those applications to revaluate their projects given the updated provincial policies,” the city said in a news release.

This progress is the result of three years of work to define the vision for the downtown and see it “enshrined in local, regional, and provincial planning policy.”

“The Minister’s decision may help reduce the long-term development pressure on existing infrastructure and neighbourhoods. On behalf of our residents, I believe there is good reason for concern about the excessive applications already underway. This decision doesn’t fully support the thoughtful and considered conversations we have had to preserve the character of downtown and welcome responsible growth. I understood us to be working towards the same outcome; should the minister’s decision fail to address this transition issue, it could result in intense pressure for incompatible change,” said Councillor Lisa Kearns.