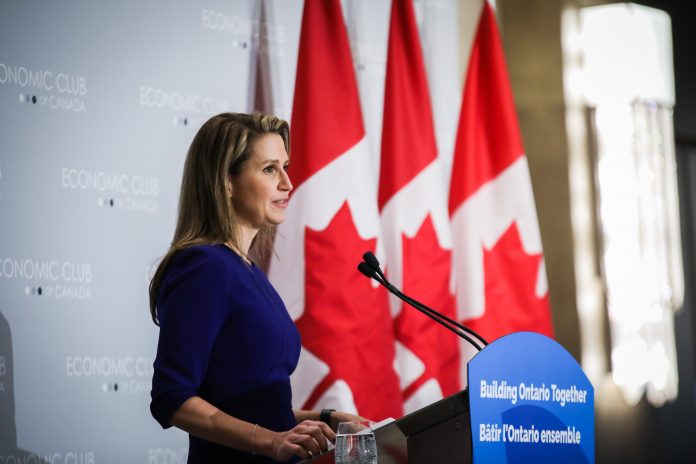 Queen’s Park intends to accelerate the development of subways in Toronto and north into York Region through regulatory changes aimed at preventing construction delays, transportation minister Caroline Mulroney said during an address to the Economic Club of Canada, in Toronto last week.

The Province’s proposal to bring new transit projects online efficiently and within established timeframes includes having the Ministry of the Environment, Conservation and Parks consider regulatory changes tailored to the unique characteristics of priority transit projects.

“The current system of environmental assessment does not offer the flexibility needed to align the timelines associated with these projects. We need a process that supports development of the region’s public transit infrastructure and provides an overall net benefit to the environment,” said Mulroney.

She continued that the changes “we plan to propose for Ontario’s environmental assessment process would balance our responsibility to safeguard our environment and meaningfully engage with indigenous communities and stakeholders, with our commitment to build much need transit” infrastructure quickly.

“This does not mean that we intend to relax any environmental protections. We are simply looking to improve the efficiency of the process for these priority transit projects.”

Mulroney told her audience that time is of the essence in the drive to increase transit capacity, to alleviate traffic congestion and increase productivity. The Greater Toronto Area (GTA) leads Canada in economic, population, and job growth, but lacks the transit infrastructure to realize the benefits of that growth, she said.

“We have fallen behind other major cities and that is just not acceptable. Across our region, our roads are plagued with congestion. Commuters are idling on highways, jammed on subway platforms or stuck in neighbourhoods without access to rapid transit. This is a barrier to our province’s prosperity and people’s quality of life.”

The average daily commute to and from work is 48 minutes, both ways, she said, citing data from the CD Howe institute that suggests congestion comes with enormous economic costs; the institute says the GTA loses $11 billion in productivity each year due to congestion, while the board of trade says congestion adds $4 million a year to the cost of goods in the region.

She offered a “sneak peak” at how the Province plans to get priority transit projects completed in a timely manner:

“This doesn’t make any sense and we intend to fix it. Our plan … would require owners of adjacent land and infrastructure to obtain a permit for development activities that may interfere with transit construction. This requirement would provide the ability to review all development and construction within the transit corridor, and influence their timing to prioritize transit works.”

“This would allow Metrolinx to require utility companies to relocate their infrastructure within a set timeframe … it also introduces a structured and consistent process for engaging and coordinating work with utilities. I think that this just makes good sense.”

“If we want our projects to be on time, our partners must have timely access to the land that they need … under our proposed plan we are looking to modernize the Province’s authority to assemble project lands and minimize the prospect for delays in this process, while still treating landowners fairly.”

The Province, said Mulroney, is developing critical highway infrastructure, improving GO service, and developing comprehensive transportation plans for every region. One of the more neglected regions, she continued, is the GTA, and to solve that $28.5 billion is being spent on subway expansion, focusing of four projects:

“Our plan for transit is truly a massive undertaking. But it is one that we can no longer afford to delay. I regularly hear from people who are thinking of moving away from Toronto because the congestion and lost time has just become too much.”

She added a personal tone to her speech, talking about how much family time is lost to daily commutes.

“We have four children involved in different activities … and we spend a lot of time shuttling them back and forth. As a parent, I love the time that I spend in the car with my kids. As parents know, this is actually quality time these days. But the quality of that time is diminished quickly by the increasing traffic and congestion across the GTA. That shouldn’t be the case.”

Her youngest daughter, she said, is 12 and by the time she is ready to join the workforce, the population of the GTA will have grown by one million people, she related. By 2045, the region’s population is expected to reach 10 million.

“The work ahead of us to build transit infrastructure for the future will not be easy. There will be some inconvenience and frustration along the way. But it will be worth it.”