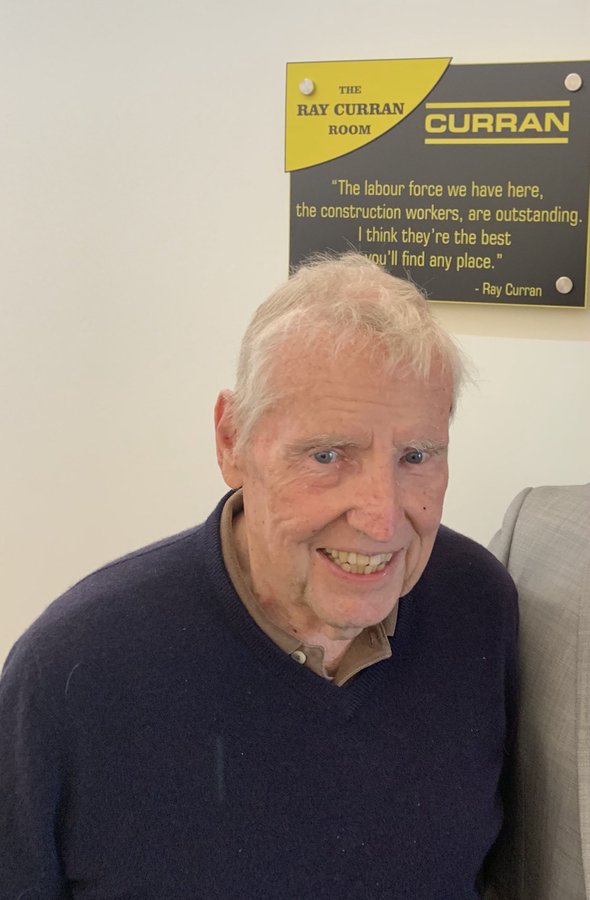 Ray Curran, founding member of the Sarnia Construction Association (SCA), is being remembered as a community builder who should have been called “Mr. Sarnia-Lambton. Curran died Jan. 2 at 91 years old.

“Ray was an untiring champion for Sarnia Lambton, which he deeply loved,” Sarnia Mayor Mike Bradley wrote on Twitter. “A decent man of integrity respected by all for his fairness and respect for others. He was a friend, advisor and mentor and will be deeply missed.”

Curran was active in local labour relations since 1953. Along with his brother Edward, he helped his father’s company, Curran & Herridge Construction become active in building and maintaining the infrastructure of Sarnia’s Chemical Valley. The company is now known as Curran Contractors.

A founding member of the SCA, Curran served as chairman for the Labour Relations Council.

“I’m grateful for his friendship in my time as president of Sarnia and District Labour Council,” McMichael wrote on Twitter. “My deepest condolences to his family and countless friends.”

Ray upheld great admiration and respect for his colleagues on both sides of the negotiation table and remained deeply grateful for the close friendships and working relationships he made through his involvement with the SCA.

He was also involved as chairman with the Labour Relations Bureau of the Ontario General Contractors Association (OGCA) and chairman of the Construction Employers Coordinating Council of Ontario. A board member of the OGCA, he was also the Director of the Sarnia-Lambton Economic Development Commission and the Chamber of Commerce Energy Committee and sat on the Board of Directors for BlueWater Power (2000-2019).

He was also a director of the Sarnia-Lambton Economic Development Commission and the Chamber of Commerce Energy Committee, a member of the board of directors for Bluewater Power and a key supporter of the Lambton College Foundation.

“Ray should have been called Mr. Sarnia-Lambton with his humble St. Clair Township roots which he never forgot and his support for all of Sarnia-Lambton from the farm gate to the factory gate,” Mayor Bradley said.