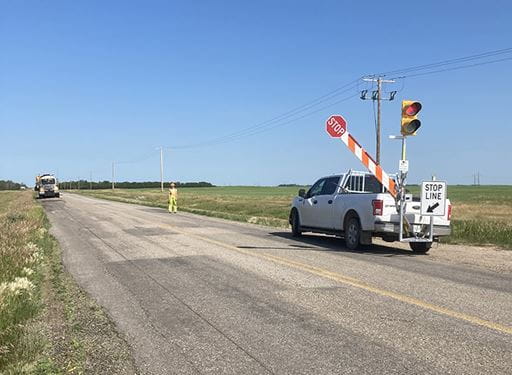 A new made-in-Saskatchewan device is helping protect some of the highest-risk workers on highway construction sites.

The truck-mounted, remote-controlled devices allow the flag person to be off the roadway while controlling traffic, minimizing their risk of injury. The devices are being used by crews in the Moose Jaw, Outlook and Prince Albert areas. This pilot program will evaluate the number of near misses, miscommunications and feedback from flag persons in these work zones.

“Flag persons often have close calls with motorists who do not slow down or pay adequate attention while traveling through work zones,” said Saskatchewan Highways Minister Fred Bradshaw.  “Being able to take workers off the road and away from traffic helps negate the very real danger that is present every minute of each shift.”

Trailer-mounted or stand-alone AFAD models have been used for larger construction sites, but their size and weight make them more difficult to move. This truck-mounted model is ideal for projects like patching or other maintenance where workers are moving frequently because the truck can simply be driven forward as needed.

The Government of Saskatchewan is improving more than 1,350 km of provincial highways this year, the second of its 10-year Growth Plan goal to build and upgrade 10,000 km of highways.  With this year’s projects, the province is ahead of the pace needed to meet this target.

The Government of Saskatchewan has invested more than $10.6 billion in highways infrastructure since 2008, working on more than 17,100 kilometres.