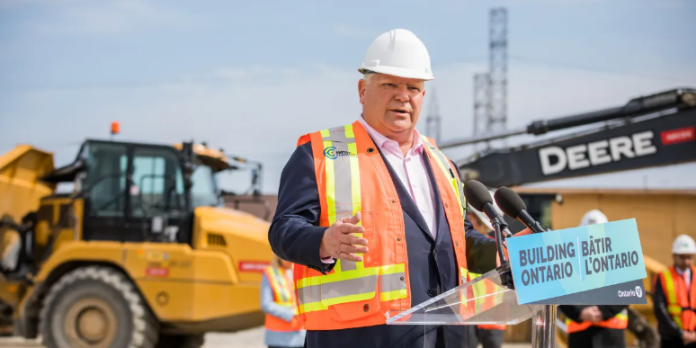 Skilled labour shortages will be one topic Ontario Premier Doug Ford raises this week at a meeting of premiers from across the country.

While the meeting will primarily focus on healthcare issues, Ford is also highlighting labour issues in a statement about his priorities for the meeting, saying more skilled workers are needed to address a “historic labour shortage.”

“I know the other premiers agree that provinces can’t do this alone,” Ford said in a statement. “We need the federal government to work with us to tackle the labour shortfall to help ensure our economy remains strong during these challenging times.”

Ontario’s immigration agreement with the federal government expires in the fall and the province is pushing for a higher number of skilled workers and more flexibility on the types of workers it can attract.

Monte McNaughton, provincial minister of labour, immigration, training and skills development, said in an interview that hundreds of thousands of jobs are going unfilled in Ontario and it is costing the economy a lot of money.

“That’s why we’re setting out to renegotiate the Ontario-Canada immigration agreement that expires this fall, to give Ontario more of a say in the the number of immigrants and the kind of immigrants that we want to build a stronger economy,” he said in an interview.

The province had asked the federal government to double the number of immigrants under the Ontario Immigrant Nominee Program from 9,000, but McNaughton said he recently received notice that the allocation would rise to 9,700.

“To be blunt, this increase isn’t going to move the meter,” he said. “We have single companies in Ontario who are short 700 workers.”

Federal Immigration, Refugees and Citizenship Minister Sean Fraser agrees with Ontario that immigration will be essential in a post-pandemic economic recovery, a spokeswoman said. She noted that Ontario already receives the highest allocation among the provinces as well as the largest share of economic immigrants.

“Additionally, as announced in Budget 2022, the government also intends to amend the Immigration and and Refugee Protection Act to improve Canada’s ability to select applicants that match its changing and diverse economic and labour force needs,” Aidan Strickland wrote in a statement.

“Labour shortages are being felt across Canada, be it in aviation, construction, hospitality, trucking and health care,” Rossi wrote. “But the provinces cannot solve this on their own.”

Michelle Eaton, the chamber’s vice-president of public affairs, said she hears about worker shortages from businesses across the province.

“There are very few that aren’t talking about having trouble obtaining the necessary amount of labour they need for their organizations,” she said in an interview.

“Immigration is…not the silver bullet, but it’s an important aspect of it. It’s just important for Ontario to have the right people with the right economic skills.”

She also suggested that governments could make immigration pilot projects for rural and remote communities permanent as a way to address regional disparities.