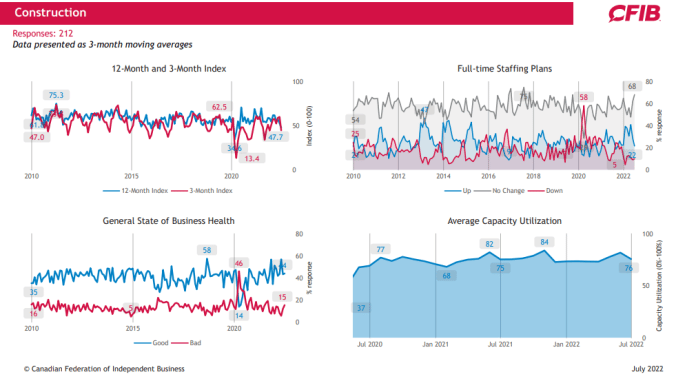 Construction ranked fifth among businesses, reporting a 55.3 per cent confidence rating, down 2.2 per cent. Hospitality, professional services, natural resources and manufacturing were the top four sectors. Agriculture, retail, health and wholesale were at the bottom.

“Businesses are really feeling the pressure of inflation right now, with both price and wage increase plans at all-time highs and growing concern over labour shortages and input costs, particularly fuel and energy,” said Simon Gaudreault, Chief Economist and Vice-President of Research at CFIB. “Worse still, they don’t feel heard – only 16% believe the federal government understands the cost pressures they face, according to a recent CFIB survey. It’s no wonder they are feeling anxious about the future.”

The major limitation on business growth is by far labour shortages (52% for shortages of skilled workers and 39% for semi- or unskilled workers). Fuel and energy costs have maintained their spot as the top cost constraint currently affecting the majority of small firms (76%).

All provinces and nearly all sectors experienced short-term drops in optimism this month, but businesses in Ontario (44.7) and Newfoundland and Labrador (45.7), and those in agriculture (37.7) and retail (38.7) were the least optimistic. While hospitality businesses (59.1) posted the highest sectoral confidence level, they experienced a 9-point drop over last month.

“These indicators should serve as a serious warning to governments that businesses are struggling,” added Andreea Bourgeois, Director of Economics at CFIB. “They should be factoring this into their economic and policy decisions in the months ahead, as businesses can’t handle any more pressure.”

July Business Barometer: July findings are based on 734 responses from a stratified random sample of CFIB members, to a controlled-access web survey. Data reflect responses received from July 5 to 13. Findings are statistically accurate to +/- 3.6%, 19 times in 20. Every new month, the entire series of indicators is recalculated for the previous month to include all survey responses received in that previous month.

Share of businesses feeling heard by the federal government: Your Voice – June 2022, an online survey conducted with CFIB members between June 9 and 30, 2022. The number of responses for that question was 2,490. For comparison purposes, a probability sample with the same number of respondents would have a margin of error of ±2.0 per cent, 19 times out of 20. Results obtained are final.