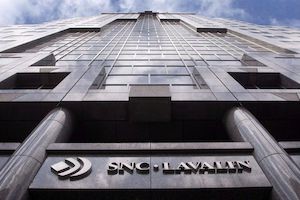 SNC-Lavalin Group Inc. felt the fallout of the COVID-19 pandemic last quarter, as sick workers and supply chain woes stalled projects in a development that could add millions more dollars in losses.

After three straight quarters of profits, the engineering firm swung to a loss of almost $53 million in the quarter ended Dec. 31, surprising analysts, who called the financial results “weak” and “messy.”

“With the Omicron variant … we were seeing absenteeism of up to 50 per cent on some of the jobs. And we saw a significant spike in productivity loss,” CEO Ian Edwards told analysts Thursday.

Under his stewardship since June 2019, SNC-Lavalin has shifted its focus to engineering services and away from so-called lump-sum turnkey (LSTK) projects — fixed-price contracts under which companies have to eat any cost overruns.

SNC’s engineering segment churned out sturdy numbers in the fourth quarter, accounting for 89 per cent of its nearly $2-billion revenue. It yielded an organic growth rate of nearly 12 per cent and a $10.9-billion backlog.

Construction on the first two will wrap up this year, Edwards said. Nonetheless, future financial risks on LSTK projects range up to $300 million, according to SNC.

“For example on Trillium, at most of the stations the concrete and steel is finished, but we’re waiting on glass,” Edwards said.

“That’s components from China post-pandemic. And then all these things add to delay … And as you can see, inflation has been pretty significant.”

On Thursday, SNC-Lavalin reported a net loss of $52.9 million in its fourth quarter — despite a $93-million win in an arbitration decision — compared with a loss $702.7 million in the same period a year earlier.

Revenue totalled $1.94 billion in the quarter, up from nearly $1.70 billion the year before.

On an adjusted basis, the company’s net loss from professional services and project management, which represent the vast majority of SNC-Lavalin’s activities, came in at 15 cents per diluted share compared with a loss of $1.53 per diluted share in the fourth quarter of 2020.

The Montreal-based company is forecasting organic revenue growth in its services segment of four to six per cent this year, in line with its 2022-2024 targets.