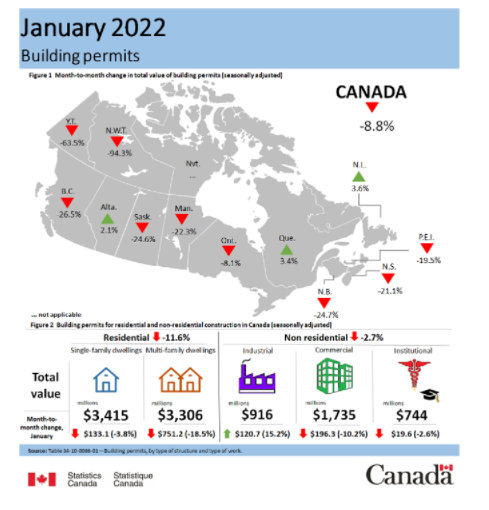 According to a recent Statistics Canada report, the total value of building permits declined 8.2 per cent.

The largest drop in the residential sector was in the multi-family component (-18.5 per cent), while intentions for single family homes decreased by 3.8 per cent. Most of the drops for January were in Ontario and British Columbia.

The commercial component decreased by 10.2 per cent in January, pulling the non-residential sector lower with Ontario and British Columbia reporting the largest declines.

Nationally, the decline in commercial construction was partially offset by a 15.2 per cent increase in the industrial component

Construction in the institutional sector (-2.6 per cent) was slightly lower in January compared to December. Declines in six provinces were offset by strong growth in Ontario (+68.4%), including a $102 million nursing home permit issued in North Bay.

Nationally, the non-residential sector was down 2.7 per cent.