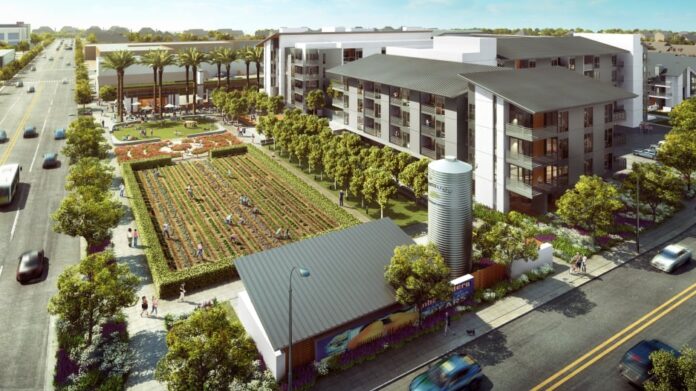 Whitchurch-Stouffville Mayor Iain Lovatt is thinking outside the box when it comes to new development in his rural communities. His council has endorsed an MZO hoping to speed up construction on an ‘agriculturally inspired’ 1,556-home subdivision on McCowan Road

Facing the construction of thousands of new homes already approved in his town through two minister zoning orders (MZO) — Lovatt is asking developer ORCA Equity Lands and the province to consider something new – an ‘agrihood’ on land where 1,000 more homes are waiting for another MZO approval.

While growth is inevitable around the GTA, the mayor says that doesn’t have to mean more and more subdivisions.

Agrihoods have caught on in the U.S. and are making in-roads in Canada. They have been around since the 1950s and today there are an estimated 150 agrihoods across the U.S.

A new housing development with a working farm at its center has broken ground in Santa Clara, California — the latest example of the “agrihood” trend taking root across the U.S. The 361-unit complex will also have enough land to produce 20,000 pounds of produce a year, available at a discount to residents.

“Not only are we providing a really unique living experience for the residents that live on the property, but we’re also taking a very deliberate approach to encouraging the health and wellness of our residents by incorporating the farm, hopefully, into their daily and weekly lifestyles,” Vince Cantore, vice president of development with the Core Companies, the developer leading the project, called Agrihood said in at a September ground-breaking.

Neighbourhoods will be built around agriculture features, such as a garden, farm, or orchard. Residents might live in single-family homes or apartments, and the agrihood itself can be in an urban, suburban, or rural area.

Canada’s largest agriculture-based community is located in British Columbia where last week homebuyers camped out for chance to buy at Southlands Tsawwassen. 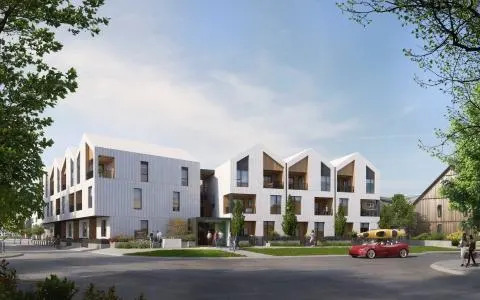 A total of 40 groups of prospective homebuyers spent the night outside for the opportunity to secure their preferred new condo unit at District Flats, the latest phase at the multiphase community in South Delta. Unlike any community in Canada, Southlands is a strategically planned and pedestrian oriented agricultural community.

“The excitement we saw this weekend shows the real estate market is still strong and people recognize that our offerings are more unique to anything else presented here in Metro Vancouver,” says Sean Hodgins, President of Century Group.

“District Flats has allowed us to expand our reach to younger professionals, as well as downsizers who have had enough of big city life and are eager to embrace a small town lifestyle.”

The development, designed by Hotson Architecture, will offer a community filled with urban amenities, making it the perfect place to escape hectic city life while still being close to the action. Southlands provides residents with the unique opportunity to enjoy locally grown food, support farmers, protect the local food supply, and connect with agriculture along with fresh air, plenty of green space, and access to Centennial Beach and Boundary Bay Regional Park.

It’s the community’s first condo and features a refined industrial aesthetic and modern, contemporary architecture, unlike any other design in the area and are located in the heart of Market Square with restaurants.

Southlands will be releasing their next phase of housing in Spring 2022.

The 110-acre development includes homes, apartments, cottages and condos adjacent to 425 acres of publicly owned farm, which Hodgins deeded back to the municipality. The company leased back 50 acres and hired a farmer to manage it. It also paid $9 million to help with irrigation and winter flood mitigation of the farmland.

It also includes community allotment gardens, a farmers’ market, coffee shops and heritage barns that have been refurbished into community spaces.

Ontario’s first agrihood project is in Drayton, about 50 kilometres north of Kitchener near the Conestoga River where Trevor Prior, with Prior Construction Corporation, say the development will be a tourist attraction.