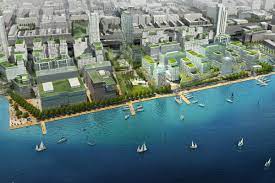 When the Canadian government announced the Canada Greener Homes Grant this past May in association with Natural Resources Canada, the strategy was a $3.5 billion olive branch extended to Canadian homeowners to help sweeten the prospect of making their houses more energy efficient.

With an estimated 18 per cent of the country’s greenhouse gas emissions attributed to construction, both commercial and residential, the grant is intended to serve as a motivator to help Canada’s fight against climate change.

While renovating an existing property remains a popular option, newly-developed sustainable communities are becoming increasingly more common, and include Bayside Toronto, a mixed-use community that is part of Waterfront Toronto’s revitalization effort.

Each home in the community boasts vinyl triple-pane windows, air-sourced heat pumps and hybrid electric water heater, among other features. Starting at $699,900 for a 1,200 square-foot, two-bedroom bungalow and topping out at $881,400 for a 2,300 square-foot, four-bedroom, two-story house, it is yet another consideration for prospective homeowners looking to make a positive impact against climate change.

But if relocating to a sustainable community isn’t feasible, there are several upgrades and programs in place to encourage homeowners to reduce their environmental impact.

Under the Canada Greener Homes Grant program, Canadian homeowners, after undergoing an EnerGuide evaluation to help determine the biggest opportunities for improvement to energy efficiency, the costs associated with any completed eligible and/or recommended upgrades are then refunded up to a maximum of $5,000. And although specifics remain unknown, the federal government also announced, in tandem with the Canada Greener Homes Grant, it will be providing interest-free loans up to $40,000 to help complete “deep home retrofits.”

One upgrade gaining in popularity is the installation of solar panels and while Tesla’s highly-discussed solar roof tiles are not yet available in Canada, more traditional solar panels remain  as viable and affordable as ever.

Nicholas Gall, director of distributed energy resources at the Canadian Renewable Energy Association, encourages budding solar panel devotees to be sure their home is a good fit.

“The main consideration when it comes to the installation of solar panels on your roof is the direction it faces,” he said. “South-facing rooftops are most optimal here in Canada, but if your roof faces east or west, that can work too. If your roof faces the north, solar is not going to be an optimal upgrade to consider.”

The direction a rooftop faces isn’t the only consideration when it comes to the installation of solar panels, Gall notes. Their efficacy can be negatively impacted by other factors, including nearby tall trees that may cast a shadow over the panels or a neighbouring home that stands taller than yours.

“Something else to take into consideration is the state of repair of your own roof. If you foresee needing to retile the roof, you’d want to get that behind you before proceeding with the installation of solar panels.”

Whether looking to complement traditional electricity with solar power or tackle bigger improvements to help minimize your carbon footprint, Gall highly recommends thoroughly researching contractors prior to the exchange of funds. And while many general contractors participate in the RenoMark system, a similar watchdog for solar installers is still a work in progress.

“In terms of solar-system installers, we are working with the Canadian Homebuilders Association (CHBA) to develop a certification framework that clients can be referred to,” he says. “That will mean minimum insurance requirements, qualifications for staff and participation in a complaint process modelled on the RenoMark system that the CHBA has in place. There’s no doubt we’re on the cusp of an era of mass adoption; more people are thinking about solar, and it’s becoming increasingly standard for new construction.”