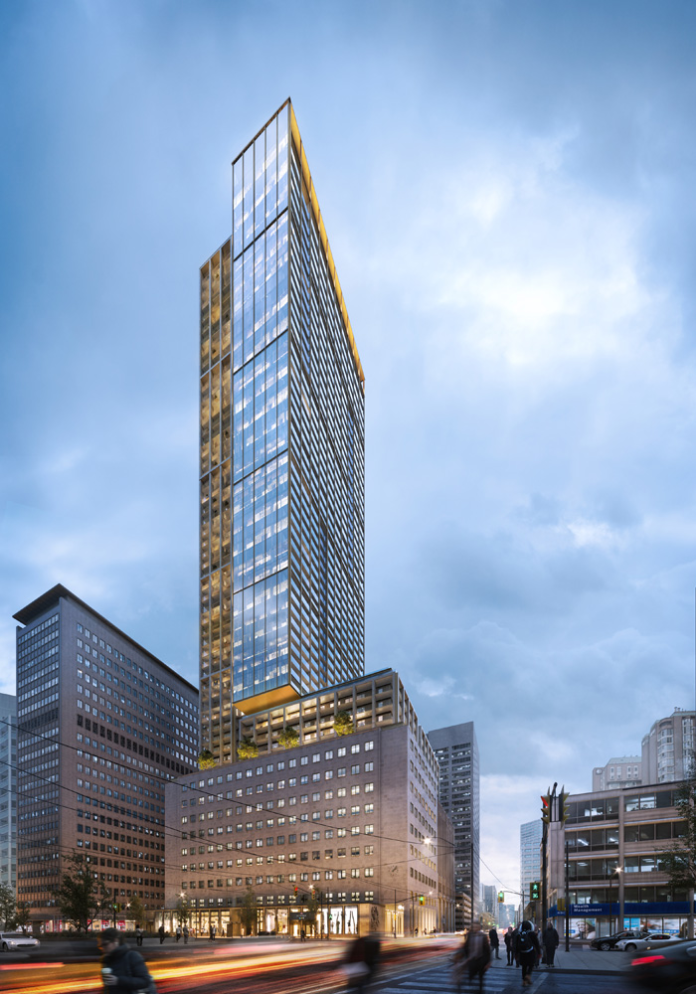 Davpart’s The United BLDG is taking shape as a transformation of two buildings at University and Dundas in downtown Toronto, incorporating North America’s tallest heritage retention.

DataBid.com says in a recent eletter that the heritage 1928-built Maclean Publishing Company and the 1961-built Maclean Hunter buildings on the northeast corner for decades are currently undergoing the process of becoming the restored limestone-clad base of the new structure.

Urban Toronto reports the new structure will include new retail and office space behind the restored facades. A B+H Architects-designed condo tower will rise 52 storeys behind them.

The site used to hold four office buildings – although only the grander two are being retained as part of the new project. The buildings formerly at the northeast corner of the site on Edward Street and Centre Avenue have been fully demolished and the space where they once stood is now home to a delivery area, a portable crane and a scaffold deck. 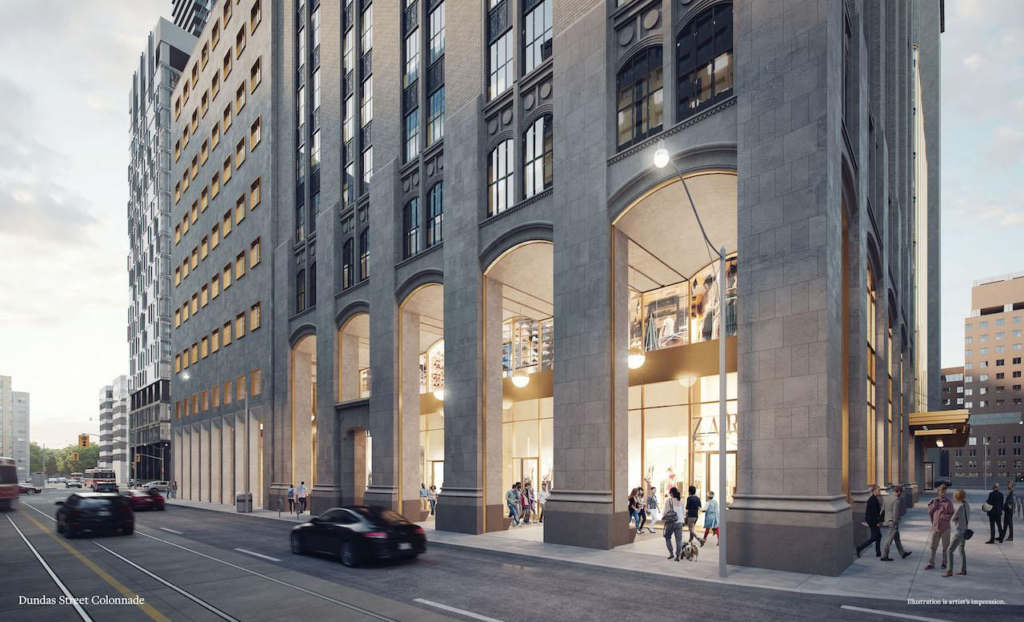 The demolished structures include buildings at 70 Centre, which had been listed on the City of Toronto’s heritage register, and 137 Edward, which was not.

The structure at 70 Centre Avenue was not ultimately required to be retained by Heritage Preservation Services (HPS) and council and as such, no parts of its facade or stones had to be salvaged or restored according to Mark Hamidi, Davpart’s Director of Development.

“We prepared a detailed pre-demolition documentation of the building for City of Toronto heritage archives,” Hamidi said. “While pre-demolition documentation of 70 Centre Avenue was not among the approval conditions for this development, it was something we elected and committed to do, which we included in the approved Heritage Impact Assessment prepared by ERA Architects.”

Buildings at 481 University and 210 Dundas will eventually have offices in them again, and 70 Centre and 137 Edward will become the entrance and lobby of the condo that will eventually rise above, plus more office space. 481 University and 210 Dundas will have their limestone facades restored, in modern contrast, the structure at Centre and Edward will be sheathed in glass panels, offering a substantial mount of natural light into the shared space.

Stone will be a major part of the  arcade along Dundas Street when the project is complete. The redevelopment includes gutting one bay of the first two storeys and first basement level facing Dundas to create a sheltered arcade out of what was once interior space. Once it is all done, this widened piece of public realm will be lined with shops and restaurants.

The United BLDG will eventually include a 52 storey condo tower including a 10-story base of offices and retail, and an amenity rooftop area including an outdoor lounge and pool

Davpart has decided to make a physical reminder of the architectural history as part of the new building. Hamidi said there will be plaques and heritage interpretation signs installed on the inside and outside of the building to identify the heritage buildings’ history.